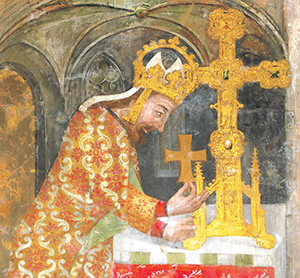 This year marks the 700th anniversary of the birth of Charles IV (1316-1378), the Holy Roman Emperor and King of Bohemia, the author of the Golden Bull, the "second Constantine," the "Last Emperor," the proponent of a Church Union, the founder of the first university in Central and Eastern Europe, a correspondent of Petrarch, and a patron of all humanist scholars and artists. In what we would now call a "pan-European" effort, he strove to create a dominant dynasty that would shift the political center of gravity to Prague, Europe's geographic center, and aspired to unite East and West under one Christian faith. Charles turned Prague from a provincial capital of the Bohemian kingdom into the cosmopolitan administrative, cultural, educational and religious hub of the entire empire—a "new Rome."

Charles's ideas and aspirations are as relevant to those concerned with contemporary Europe as they are to those studying medieval European civilization. The era of his reign, described as the Golden Age of Czech history, offers many parallels with contemporary affairs. Few European monarchs had as great an influence on the culture of their own and future generations as Charles, whom the Czech people consider to be "the father of the nation."

This symposium brings together an international and interdisciplinary panel of scholars, who will examine a number of aspects of Charles's reign and ponder their implications for past and present. Among the themes that will be evoked are dynastical and ecclesiastical politics, the formation of national identities, the use of art and architecture as a political tool, and the development of new literary and religious modes, to name just a few.