2014: The Dangers and Pleasures of the Russian Love Lyric 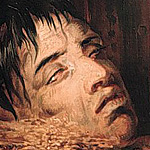 Willem Mons, a German in the service of the Russian Empire and one of the most prominent courtiers of the age Peter the Great, has been credited as the first author of love poetry in Russian (which he wrote, interestingly, in transliteration into the Latin alphabet). In 1724, he was charged with embezzlement and executed. Rumor had it that, in reality, he was punished for his love affair with Peter's wife, the Empress Catherine I, that quite probably began 190 years ago this year. Mons' last poem, written in Russian on the eve of his execution, was a meditation on the evils of love.

This symposium/workshop is dedicated to the memory of the unfortunate lover Willem Mons and to the tradition that he founded. Russian lyric love poetry has, from that day onward, occupied a prominent position in Russian poetic culture. Even in the west, the Russian love lyric forms a prominent part of the cultural heritage—in the form of the many song-settings of Russian classical composers based in this tradition—from Glinka and Tchaikovsky, to Prokofiev and Schnittke. It should further be noted that the Russian lyric has, in the past decade, experienced something of a renaissance, that has brought to the fore a great many new voices and entirely new readerships.

For these reasons, we believe that the time is right for a fresh look at the Russian love lyric. The participants in the proposed event will devote their attention to the close reading and discussion of Russian love poetry of various periods, from Mons’ day to the present, and will address the complex set of phenomena associated with Russian love poetry as a cultural phenomenon. The workshop brings together poets, translators, and scholars of Russian poetry for a one-day discussion concerning the dangers (and pleasures) of lyrical love poetry.

POLINA BARSKOVA is associate professor of Russian literature at Hampshire College. Her scholarly publications include articles on Nabokov, the Bakhtin brothers, early Soviet film, and the aestheticization of historical trauma. She has also authored six books of poetry in Russian. Her prize-winning books of poetry in Russian have earned an international reputation, and individual poems have appeared in prestigious journals and anthologies. Professor Barskova is currently working on a project entitled "Petersburg Beseiged: Culture of the Aesthetic Opposition." (Context poetry)

CATHERINE CIEPIELA is Amherst College Professor of Russian and the author of The Same Solitude: Boris Pasternak and Marina Tsvetaeva (Ithaca: Cornell University Press, 2006) and The Stray Dog Cabaret: a Book of Russian Poems (New York  New York Review Books, 2007). A prominent translatopr fropm Russian, she has received several prestigious recognitions for her writing and editing.

DMITRY KUZMIN is a prominent Russian poet and Kulturtrager, the founder of the Vavilon Union of Young Poets, which was the organizational hub for Moscow's experimental poetry scene. Since 1993 he has been the head of ARGO-RISK Publishers (which publishes about twenty titles of current Russian poetry yearly). Since 1996 he has edited the Vavilon Internet project (www.vavilon.ru) which includes an anthology of contemporary Russian writing (about 200 authors at present). Since 2006 he has also been editor in chief of Vozdukh [Atmosphere], a quarterly poetry magazine. Kuzmin has also run other periodicals including the first Russian magazine for gay writing Risk (1996–2002). He has won the Andrei Bely award of Merit in Literature (2002). Kuzmin's poems have been published in translation in USA (A Public Space, St. Petersburg Review, Habitus, Aufgabe, Fulcrum), England, France, Poland, China, Italy, Estonia, and Slovenia. He has published in Russia translations of poetry from English (Auden, Cummings, Stevens, Ashbery), French, and Ukrainian. Kuzmin's selected poems and translations were published in 2008 in a 400-page hardcover edition, Horosho byt’ zhivym [It’s fine to be alive], and won the Moskovsky Shchet [Moscow Count] award for the best debut poetry collection.

JAMES MCGAVRAN defended his PhD dissertation on Mayakovsky at Princeton. He has taught courses on twentieth-century Russian poetry, poetics and translation theory and practice. He will join the Slavic Department at Penn in July 2014. RUSS    ENG

THOMAS NEWLIN is associate professor and chair of Russian at Oberlin College. Professor Newlin teaches a range of literature courses in translation, including “Love in the Cold Climate,” “Tolstoy and Dostoevsky,” “Literature and the Woman Question in Nineteenth-Century Russia,” “Literature and the Land: Nature-Writing in Russia and America,” “The Meaning of Life: Dispatches from Nineteenth-Century Russia.” His scholarly interests focus on eighteenth- and nineteenth-century Russian literature and history, Russian visual culture, and the history of ecological ideas in Russia. He is author of The Voice in the Garden: Andrei Bolotov and the Anxieties of Russian Pastoral (Northwestern, 2001), and is currently writing a book that explores the ways nineteenth-century Russian writers, artists, and scientists looked at and represented the natural world.

KEVIN M. F. PLATT is Edmund J. and Louise W. Khan Term Professor in the Humanities, Chair of the Program in Comparative Literature and Professor of Slavic Languages and Literatures at the University of Pennsylvania. He is the author of Terror and Greatness: Ivan and Peter as Russian Myths (2011) and History in a Grotesque Key: Russian Literature and the Idea of Revolution (1997; Russian edition 2006), and the co-editor (with David Brandenberger) of Epic Revisionism: Russian History and Literature as Stalinist Propaganda (Wisconsin UP, 2006). He also edited and contributed translations to Modernist Archaist: Selected Poems by Osip Mandelstam (2008) and edited Intimations: Selected Poetry by Anna Akhmatova, translated by James Falen (2010). His current projects include a critical historiography of Russia, a study of contemporary Russian culture in Latvia and a number of translation projects.

STEPHANIE SANDLER is Ernest E. Monrad Professor, Slavic Languages & Literatures at Harvard. She has written about Pushkin and myths of Pushkin in Russian culture, and about contemporary poetry of Russia and of the United States. Her published books include Distant Pleasures: Alexander Pushkin and the Writing of Exile (1989); Commemorating Pushkin: Russia's Myth of a National Poet (2004); and three edited collections: Rereading Russian Poetry (1999); Self and Story in Russian History (2000; with Laura Engelstein); and Sexuality and the Body in Russian Culture (1993; with Jane Costlow and Judith Vowles). Sandler’s current research is on contemporary Russian poetry. It includes articles on individual poets (many of which are uploaded to this site in the Publications section). She is also at work on a book-length manuscript, Contemporary Poetry in Russian: Breaking Down the Walls.

ILYA VINITSKY is Professor of Russian at the University of Pennsylvania. His main fields of expertise are eighteenth- and nineteenth- century Russian literature, Russian poetry, the history of emotions, and nineteenth- century intellectual and spiritual history. His most representative publications include Interpreter’s House: Poetic Semantics and Historical Imagination of Vasily Zhukovsky (2006, in Russian), A Cultural History of Russian Literature (2009; together with Andrew Wachtel), Madness and the Mad in Russian Culture (2007; co-edited with Angela Brintlinger) and Ghostly Paradoxes: Modern Spiritualism and Russian Culture in the Age of Realism (2009). His new book Heavenly Sisters: Vasily Zhukovsky and the Romantic Religion of Love is forthcoming with Northwestern University Press in 2014. In this book Vinitsky reconstructs the “emotional biography” of Vasily Zhukovsky (1783-1852),—an outstanding poet and translator, the creator of the first aesthetic philosophy in Russian literature, which influenced several generations of Russian authors from Pushkin to Vladimir Solov'ev and Aleksandr Blok.

MICHAEL WACHTEL is Professor of Russian at Princeton. His main research interests are in Russian poetry (from the eighteenth century to the present), poetics, and Russo-German literary relations. Broadly speaking, he studies the ways that Russian poets borrow and creatively adapt the work of their predecessors and contemporaries (both Russian and Western European).  His publications include Russian Symbolism and Literary Tradition: Goethe, Novalis, and the Poetics of Vyacheslav Ivanov (1994), The Development of Russian Verse: Meter and its Meanings (1998), The Cambridge Introduction to Russian Poetry (2004). In 2007, Wachtel received the Guggenheim Fellowship for research on "Pushkin's Lyric Poetry" that resulted in A Commentary to Pushkin’s Lyric Poetry: 1826-1836 (2011).

LUSIA ZAITSEVA completed her B.A. in French literature at Columbia University with honors in 2010 and her A.M. in comparative literature at Harvard in 2013. She is currently pursuing her Ph.D. in the same department. She works in Russian, French, and Urdu literature of the 20th and 21st centuries. In the past she has written on narratives of resistance in Anna Akhmatova's Requiem, subversion and trauma in the work of Osip Mandel'stam and Boris Pasternak, witnessing in Jonathan Littell's Les Bienveillantes, and memory in Yannick Haenel's Jan Karski, Laurent Binet's HHhH, and Marcel Ophuls's Hotel Terminus. She is currently working on Joseph Brodsky and the Urdu poet Faiz Ahmed Faiz

Participants will discuss lyrical poems by: