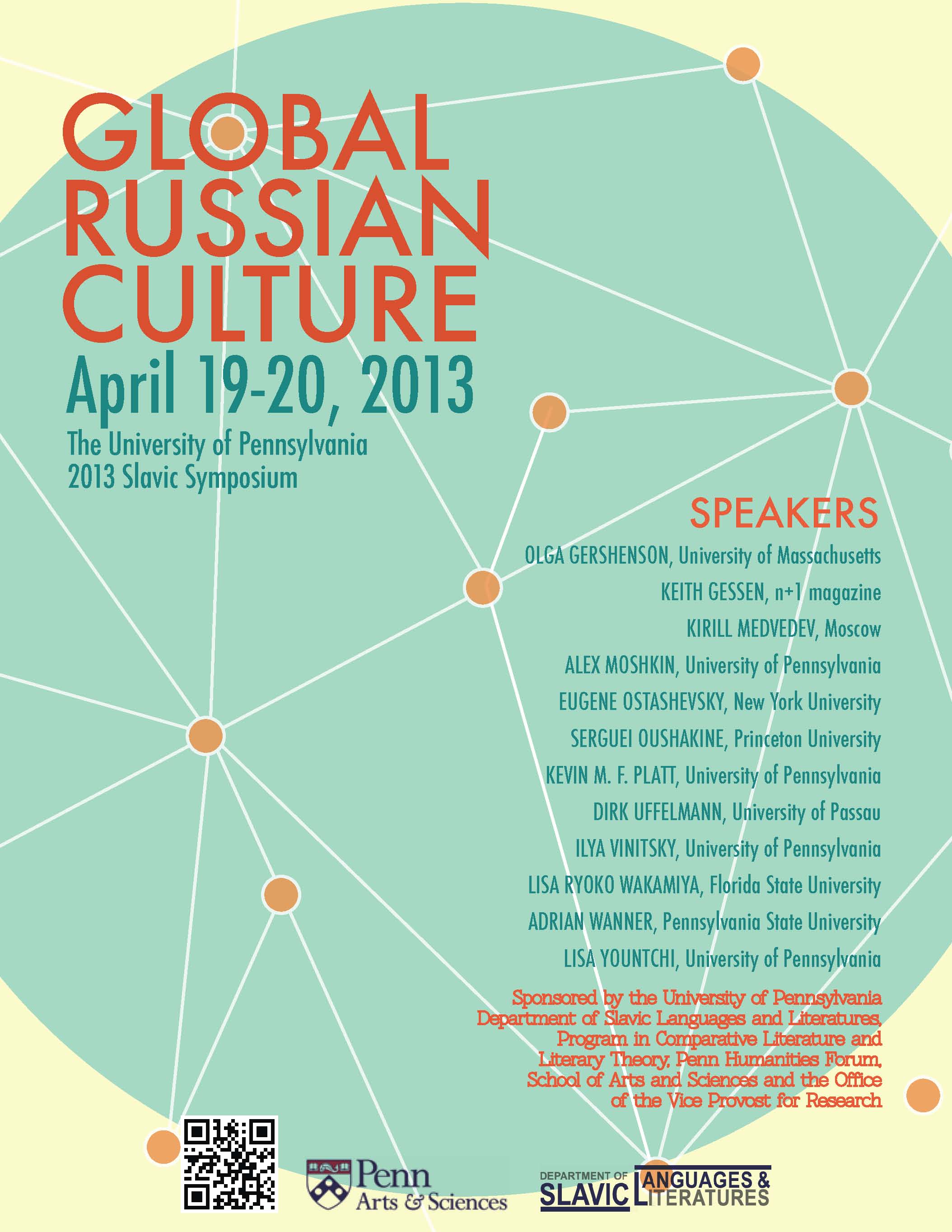 Sponsored by the University of Pennsylvania School of Arts and Sciences, the Department of Slavic Languages and Literatures, the Program in Comparative Literature and Literary Theory, Penn Humanities Forum, and the Office of Vice Provost for Research

Slavic Spring Symposium at the University of Pennsylvania

Ilya Vinitsky, University of Pennsylvania, ""I have Been Her Familiar Guest & Visitor for More Than Forty Years": The Life and Opinions of Alexis Eustaphieve, a Don Cossack and the First Russian Consul in Boston."

Alex Moshkin, University of Pennsylvania, “Film as Palimpsest: An Aesthetic Dissection of Kalik’s And the Wind Returneth”

The Soviet Periphery and the Post-Soviet Near Abroad

Kevin M. F. Platt, University of Pennsylvania, “Hegemony Without Dominance: Russian Culture in the Near Abroad”

Dr. Vinitsky is Associate Professor and Chair of the Department of Slavic Languages and Literatures at the University of Pennsylvania. His main fields of expertise are nineteenth- century Russian literature, the history of emotions, and nineteenth- and early twentieth century intellectual and spiritual history.His recent books include Ghostly Paradoxes: Modern Spiritualism and Russian Culture in the Age of Realism (Toronto University Press, 2009; Choice Magazine's list of Outstanding Academic Titles for 2010) and A Cultural History of Russian Literature, co-written with Andrew Baruch Wachtel (Cambridge: Polity Press, 2009). He is currently writing a book with a long provisional title Between a Rugged Bear and a Polished Gentleman: The Life and Opinions of Alexis Eustaphieve, a Don Cossack, British Political Pamphleteer, and the First Russian Consul at Boston. The scholarly flavor of this project for him resides in the fact that its subject rests on the intersection of three disciplines, — literature, history, and politics, — and three national literary and political traditions, — Russian, English, and American.https://mail.google.com/mail/images/cleardot.gif

Dr. Wakamiya is Associate Professor of Slavic in the Department of Modern Languages and Linguistics at Florida State University. She is the author of Locating Exiled Writers in Contemporary Russian Literature (2009) and co-editor with Mark Lipovetsky (University of Colorado, Boulder) of Late and Post-Soviet Russian Literature: A Reader (projected 2013). Her current book project examines the relationship between collecting material objects and the creation of narrative. In 2013-2014 she will be a Senior Fellow at the Davis Center for Russian and Eurasian Studies at Harvard University.

Dr. Wanner is Professor of Russian and Comparative Literature at the Pennsylvania State University, where he served as head of the Department of Germanic and Slavic Languages and Literatures from 2001 to 2008 and is currently co-director of the graduate program in German. He is the author of Baudelaire in Russia (University Press of Florida, 1996), Russian Minimalism: From the Prose Poem to the Anti-Story (Northwestern University Press, 2003), and Out of Russia: Fictions of a New Translingual Diaspora (Northwestern University Press, 2011). In addition he has published five editions of Russian, Romanian, and Ukrainian poetry in his German verse translation.

Dr. English is John Welsh Centennial Professor of English at the University of Pennsylvania and Director of the Penn Humanities Forum. His recent work has focused on the sociology of literature and the history of literary studies as a discipline. The Economy of Prestige: Prizes, Awards, and the Circulation of Cultural Value (Harvard UP) was named Best Academic Book of 2005 by New York Magazine; New Sociologies of Literature, a special issue of New Literary History co-edited with Rita Felski, appeared in 2010; The Global Future of English Studies was published last year in the Blackwell Manifesto series.

Eugene Ostashevsky is a Master Teacher in the Liberal Studies Program at New York University. He has published three books of poetry—Iterature, The Life and Opinions of DJ Spinoza and Enter Morris Imposternak, Pursued by Ironies—with Ugly Duckling Presse. His work as translator includes OBERIU: An Anthology of Russian Absurdism (Northwestern UP, 2006), a selection of 1930s underground writings by Alexander Vvedensky, Daniil Kharms and others in their circle. Most recently he was the editor of Alexander Vvedensky: An Invitation for Me to Think (NYRB/Poets, 2013), a collection of translations of Vvedensky by Ostashevsky and Matvei Yankelevich.

Dr. Gershenson is Associate Professor of Judaic and Near Eastern Studies at the University of Massachusetts in Amherst. She is the author of Gesher: Russian Theatre in Israel (Peter Lang, 2005) and editor of Ladies and Gents: Public Toilets and Gender (Temple UP, 2009). Her latest book is titled The Phantom Holocaust: Soviet Cinema and Jewish Catastrophe (Rutgers UP, 2013). To learn more about her work, see here.

Mr. Moshkin is currently a first-year Comparative Literature student at the University of Pennsylvania. He has completed both his Bachelor and Master degrees at the University of Toronto. Alex had lived in several different countries, including Kazakhstan, Russia, Israel and Canada. Following his biographical trajectory, in his doctorate studies he is focusing on the cultural production of Russian immigrants in Israel in the Russian and Hebrew languages.

Mr. Gleissner is a graduate student at the Department of Slavic Languages and Literatures at Princeton University. He holds a Magister Artium degree in Slavic Studies, Political Science, and Economics from Christian-Albrechts-Universität zu Kiel, Germany. His current research interests are Czech and Russian literature of the late 20th century, periodical studies, and literary sociology. He has published on Konstantin Bal'mont and the early Il'ia Erenburg.

Dr. Oushakine is Associate Professor of Slavic Languages and Literature and Anthropology at Princeton University. His research explores how the collapse of state socialism has simultaneously undermined already existing communities and precipitated the emergence of new ones across Eurasia. He is the author of The Patriotism of Despair: Nation, War, and Loss in Russia (Cornell UP, 2009), which was recognized as the best book on Slavic and East European Literary and Cultural Studies by the American Association of Teachers of Slavic and East European Languages. His current project focuses on postcolonial authoritarianism in Belarus and Kyrgyzstan, the practices of late Soviet consumption, the political mobilization of popular culture in Soviet Russia, and socialist nostalgia.

Kirill Medvedev is a poet and socialist activist from Moscow. He is the founder of the Free Marxist Press and the author of Vsyo Plokho (OGI, 2000), Vtorzhenie (ARGO-RISK, 2002), Teksty, Izdanny Bez Vedoma Aftora (NLO, 2005), 3% (Svobodnoe Marksistkoe Izdatel'stvo, 2007), and Zhit' Dolgo, Umeret' Molodym (Translit and SMI, 2011). An English collection of his works, It's No Good: Poems, Actions, Manifestos, was recently published by n+1 and Ugly Duckling Presse. Medvedev is a frequent contributor to Translit and the lead singer of Arkady Kots, a protest rock band.

Keith Gessen is a founding editor of n+1 and Kirill Medvedev's translator; he has also translated Ludmilla Petrushevskaya and Vladimir Sorokin. He writes about Russia for the New Yorker and the London Review of Books.

Dr. Yountchi is currently a Lecturer in the Slavic Languages and Literatures Department at the University of Pennsylvania. Prior to coming to UPenn, Lisa was a Visiting Scholar at Columbia University's Harriman Institute (2010-2011) and a PhD candidate in the Department of Slavic Languages and Literatures at Northwestern University (PhD received, June 2011). Lisa's research focuses on Central Asia (particularly Soviet and Post-Soviet Tajik literature) and Russian-Iranian cultural exchange. Currently, she is in the process of transforming her 2011 dissertation into a book. Tentatively entitled, Sovietizing the Shahnameh: The Role of Soviet Tajik Writers in the History of Soviet-Iranian Relations, the project examines the history of Russian-Iranian cultural exchange, and highlights the central role of Tajik writers, scholars, and translators in promoting Soviet ideology and cultural relations in Iran from the 1930s until the establishment of the Islamic Republic of Iran in 1979. Her recent publications include: "The Politics of Scholarship and the Scholarship of Politics: Imperial, Soviet, and Post-Soviet scholars studying Tajikistan," in The Heritage of Soviet Oriental Studies (London: Routledge, 2010), and "An Ode to Great Friendship: Russia, Iran, and the Soviet Tajik Writer" (Clio: A Journal of Literature, History, and the Philosophy of History, Winter 2011).

Dr. Platt is Edmund J. and Louise W. Kahn Term Professor in the Humanities, Professor of Slavic Languages and Literatures and Graduate Chair of the Comparative Literature Program at the University of Pennsylvania. He works on representations of Russian history, Russian lyric poetry, and global post-Soviet Russian culture. He is the author most recently of Terror and Greatness: Ivan and Peter as Russian Myths (Cornell UP, 2011) His current projects include a critical historiography of Russia, a study of contemporary Russian culture in Latvia and a number of translation projects.

Dr. Djagalov is a postdoctoral fellow in the Penn Humanities Forum and a lecturer in Slavic at the University of Pennsylvania. Prior to his appointment there, he was a tutor in the Committee on History and Literature at Harvard University and a graduate student in the department of Comparative Literature at Yale. He is currently working on two book manuscripts "The People's Republic of Letters: Towards a Media History of Socialist Internationalism" and "Premature Postcolonialists: Soviet-Third-World Cultural Liaisons".