2010: The Thaw: Visual Culture and Beyond 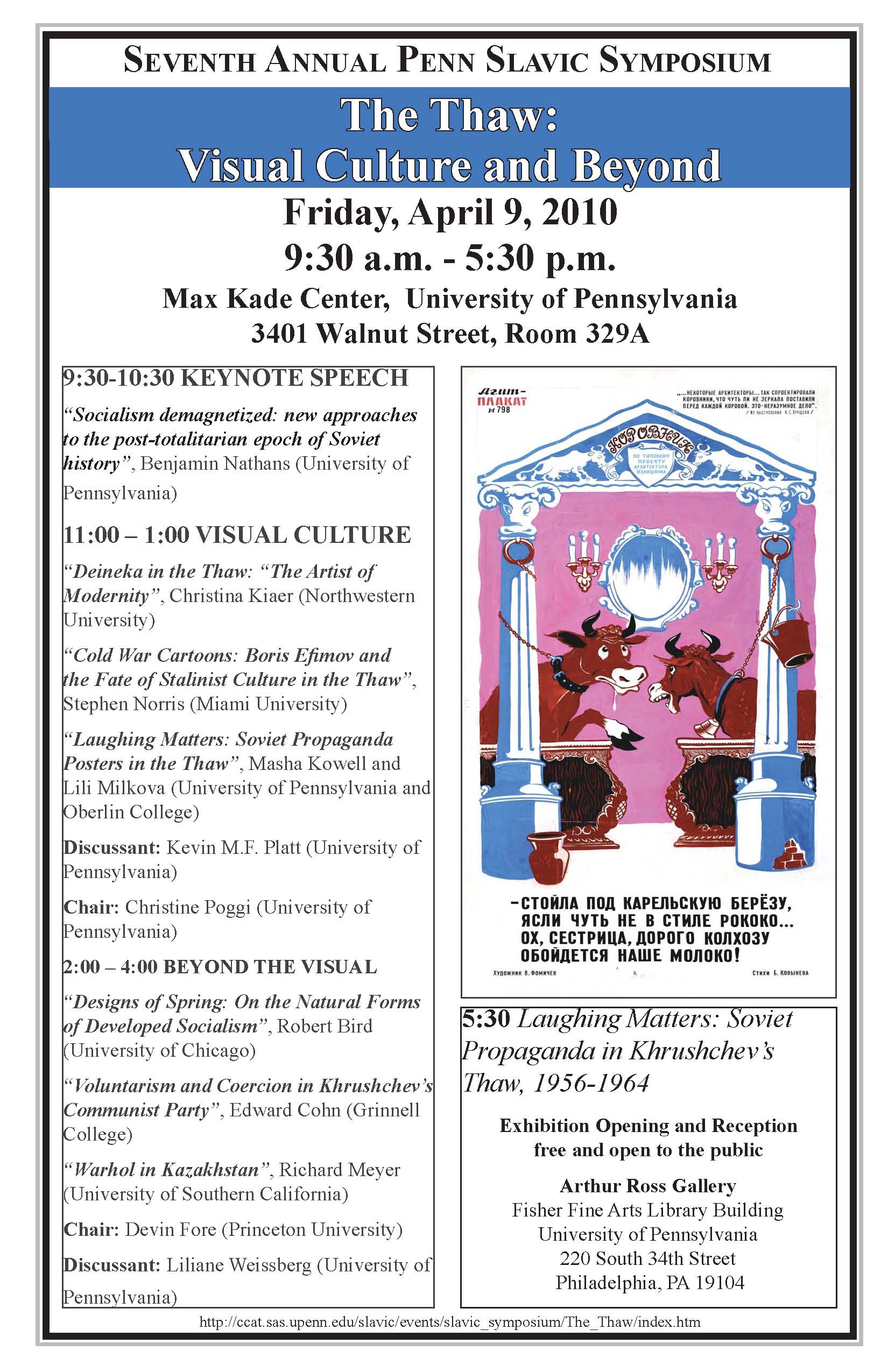 The Thaw: Visual Culture and Beyond

During its seven-decade history, Soviet rule conditioned a changing aesthetics of power—from the pioneering Constructivism of the early post-revolutionary period to the formulaic post-war Stalinist art to the 1970s nonconformist practices that subjected the official lexicon to ironic transformations. The object of numerous scholarly studies, museum exhibitions, and private collections, these artistic developments have enjoyed great popular and academic attention. However, the scholarly lens has not, to date, focused sufficiently on the specificity of art production in the period following Stalin’s death in 1953 and preceding the emergence of an artistic underground in the late 1960s and early 1970s, a period without which in the next decade the humorous, often ironic, sensibilities of dissenting movements such as Sots Art would not have been possible.

This symposium is the first scholarly gathering to examine Soviet public culture and its visual manifestations in the so-called “Thaw” period, a singular moment of post-Stalinist liberalization during Nikita Khrushchev’s rise to power (1956-1964) when the country was experiencing unprecedented “warming-up” in all social and cultural spheres. Entitled “The Thaw: Visual Culture and Beyond,” the symposium provides an interdisciplinary approach to the study of Soviet propaganda, as well as popular and material culture during that decade vis-à-vis everyday practices and in the context of the changing Party directives and means of social control. Moreover, the symposium brings to the fore the rarely explored gray area that lies between overt propaganda and private existence. Taken in their totality, the papers presented at the symposium highlight not only the efforts of the Soviet state to re-activate a dialogue with a populace alienated and desensitized by the years of Stalinist intimidation and heavy-handed political indoctrination, but also discloses the indelible and incurable presence of totalitarian political discourse that undergirded these tangible attempts to reach out to atomized Soviet citizens.

The symposium is organized around original research papers, which will be pre-circulated to participants and audience members online. Speakers will deliver 30-minute presentations, in which they will summarize their contributions and emphasize their central arguments after which general discussion will follow.

The symposium is held in conjunction with the exhibition “Laughing Matters: Soviet Propaganda in Khruschev’s Thaw, 1956-1964,” which opens at Penn’s Arthur Ross Gallery on the same day and features a thematically coherent sample of political posters that testifies to the aesthetic shifts in political iconography and conjures Khrushchev’s programmatic economic reforms.

Benjamin Nathans is Professor of History at Penn. He is the author of Beyond the Pale: The Jewish Encounter with Late Imperial Russia (2002) and of numerous articles on Russian, Soviet, and modern Jewish history. He is currently writing a history of the Soviet dissident movement and the idea of civil and human rights under late socialism.

Abstract: The talk will address the problem of historicizing the second half of the Soviet epoch, long overshadowed by the high drama and revolutionary violence of the first half.

Stephen Norris is Associate Professor of History at Miami University (OH). He is the author of A War of Images: Russian Popular Prints, Wartime Culture, and National Identity, 1812-1945 (2006) and co-editor of Preserving Petersburg: History, Memory, Nostalgia (2008) and Insiders and Outsiders in Russian Cinema (2008). His forthcoming books are Blockbuster History: Movies, Memory, and Patriotism in the Putin Era and People of Empire: Lives of Culture and Power in Russian Eurasia, 1500-Present.

“Cold War Cartoons: Boris Efimov and the Fate of Stalinist Culture in the Thaw”

Abstract: This paper focuses on cartoonist Boris Efimov’s Thaw-era work and how the identification of enemies, a central component of Stalinist culture, survived after 1953.

Christina Kiaer teaches twentieth-century art at Northwestern University and specializes in Russian and Soviet art, the politics of the avant-garde, and feminist theory and art. Her book Imagine No Possessions: The Socialist Objects of Russian Constructivism appeared in 2005, as did an interdisciplinary volume of essays on Soviet cultural history that she co-edited with Eric Naiman, Everyday Life in Early Soviet Russia: Taking the Revolution Inside.

“Deineka in the Thaw: “The Artist of Modernity”

Abstract: Aleksandr Deineka had been an enormously popular official artist during the 1930s, in spite of the obvious modernist tendencies of his work. But he fell definitively out of favor in the hard-line crackdown in the arts that followed World War II, and from 1948 to 1957 there were few mentions of him in the art press, and he received only a modest number of commissions. The Thaw was therefore enormously significant for Deineka: he was granted a major solo exhibition in 1957, and exhibition reviews universally praised him as “the artist of modernity.” My talk will examine the significance of his rehabilitation in the context of the Thaw, and the relation of his so-called modernity to the larger problem of the modernism/Socialist Realism binary.

Robert Bird is Associate Professor at the University of Chicago. He is the author of Russian Prospero (2006) and two books on the film-maker Andrei Tarkovsky, Andrei Rublev (2004) and Andrei Tarkovsky: Elements of Cinema (2008). His translations of Russian religious thought include On Spiritual Unity: A Slavophile Reader (1998) and Viacheslav Ivanov’s Selected Essays (2001). His works in progress include The Soviet Imaginary and a book on Dostoevsky and narrative theory, provisionally entitled In Suspense.

“Designs of Spring: On the Natural Form of Developed Socialism”

Abstract: The paper discusses the contradictions manifest in the poster “Good for neither village nor town,” which takes a swipe at some of the more grotesque aspects of Stalinist science, specifically the speculative attempts at genetic engineering and how these contradictions help us to understand why Khrushchev’s Thaw never quite became a new spring.

Edward Cohn is an assistant professor of history at Grinnell College. He earned his PhD from the University of Chicago in 2007 and is now revising his dissertation (about the post-war Soviet Communist party's system of internal discipline) for publication as a monograph.

Abstract: The paper investigates party initiatives under Khrushchev designed to encourage voluntary self-policing and the attempts of party leaders to inspire a new generation of Soviet citizens to become "fighters for Communism."

Richard E. Meyer is Associate Professor of Art History and Fine Arts, University of Southern California. He is the author of the award-winning book Outlaw Representation: Censorship and Homosexuality in Twentieth-Century American Art.

Abstract: The paper views the legacy of Socialist Realism in the context of the 2000 Warhol retrospective that toured Eastern Europe, Russia, and Central Asia.

Masha Kowell and Liliana Milkova Title: “Laughing Matters: Political Posters from the Thaw” Abstract: Using the exhibition posters as a point of departure, the paper addresses the use of humor as a new indoctrination device in Soviet political iconography during the Thaw. Liliana Milkova is Curator of Academic Programs at Oberlin College. Masha Kowell is a Ph.D. Candidate in art history at the University of Pennsylvania.

“Deineka in the Thaw: “The Artist of Modernity,” Christina Kiaer (Northwestern University)

“Designs of Spring: On the Natural Forms of Developed Socialism,” Robert Bird (University of Chicago)