2006: Samizdat and Underground Culture in the Soviet Bloc Counries 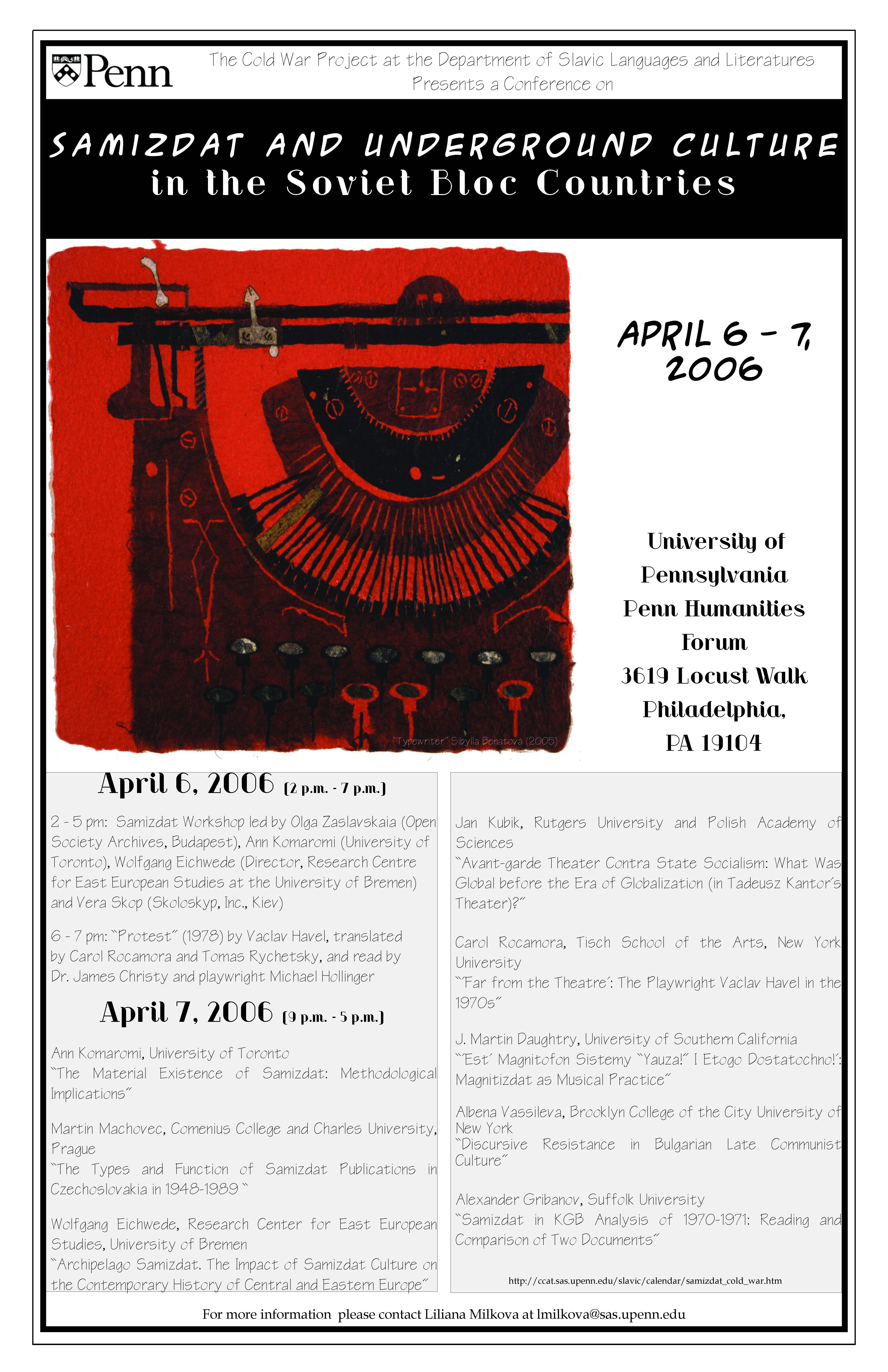 Samizdat and Underground Culture in the Soviet Bloc Countries

All events will take place at the Penn Humanities Forum at 3619 Locust Walk unless otherwise noted.

“Samizdat and Underground Culture in the Soviet Bloc Countries” is the first scholarly gathering in the United States dedicated to the specific practice of underground anti-establishment literature and artistic activities that flourished from the mid-1950s through the 1980s. The conference aims to assemble experts in the field from both the US and abroad to offer a comparative study of the variety of literary and artistic practices in the Eastern Bloc countries, and to offer a critical approach towards their national specificity and formative socio-political factors. The conference is a bi-partite event. The first part will comprise a day-long Samizdat workshop (first of its kind in the US) led by representatives of the largest collections of Samizdat materials, including the Open Society Archives in Budapest, who will present and discuss their holdings, followed by a reading of Vaclav Havel’s 1978 underground play “Protest.”

The second day will comprise scholarly presentations organized in three panels with three speakers each. The presenters will include leading scholars from Belgium, Bulgaria, Hungary, Canada, the Czech Republic, and the US, as well as representatives of the Penn community (including faculty and a graduate student in Art History).

The panels will feature original article-length (20-30pp.) papers by each participant, which will be pre-circulated to conference participants and audience members. Participants will present 20-25-minute summaries of their papers, making possible a compact event with time for productive discussion.

Wolfgang Eichwede , Professor and Director of the Research Centre for East European Studies, University of Bremen

Martin Machovec, Comenius College and Charles University , Prague, " The Types and Functions of Samizdat Publications in Czechoslovakia in 1948-1989. "

Jan Kubik, Rutgers University and Polish Academy of Sciences, " Avant-garde Theater Contra State Socialism: What Was Global before the Era of Globalization (in Tadeusz Kantor’s Theater)?"

Carol Rocamora, Tisch School of the Arts, New York University, "' Far from the Theatre' : The Playwright Vaclav Havel in the 1970s”