The Minor program in East Central European Studies offers students the opportunity for the interdisciplinary study of the language, history, politics, literature, and culture of Eastern and Central Europe.

Currently offered languages of this region include Bosnian/Croatian/Serbian, Czech, Hungarian, Polish, Ukrainian, and Yiddish. Students may satisfy the language requirement in a language not offered at Penn by completing language coursework through a study abroad or by demonstrating equivalent proficiency in a test.

The minor requires a total of six courses (6 c.u.) on the culture, history, society, literature, politics, or economics of the Central and East European region, beyond the completion of two semesters of language study or the demonstration of equivalent proficiency.

These six courses must include four courses taught in the department that are related to the geographic area of Central and Eastern Europe. The remaining two courses towards the minor may be additional courses taught by the department faculty, bearing REES attributes, or courses taken at a different institution (study abroad or transfer credit). Only two courses with primary REES number (on strictly Russian topics) can be a part of ECES minor. Students, who major or minor in REES and specialize in Russian can count only one course on a Russian topic towards ECES minor. With the approval of the undergraduate chair, electives may also include courses offered at other departments which are not cross-listed with REES, yet which concern Central and Eastern Europe in significant portion of their content. Only two courses from study abroad can be counted towards this minor.

Application for the ECES Minor

Completion of at least two semesters of language study or the demonstration of equivalent proficiency.

At least 2 c.u. should be courses with comparative topics covering more than one country of CEE. 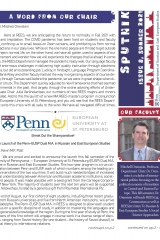