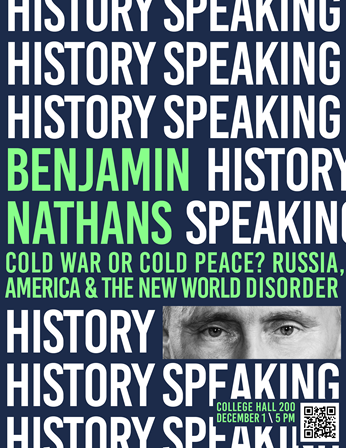 A lecture by Dr. Benjamin Nathans

Benjamin Nathans is the Alan Charles Kors Endowed Term Associate Professor of History. He teaches and writes about Imperial Russia and the Soviet Union, modern European Jewish history, and the history of human rights. He edited A Research Guide to Materials on the History of Russian Jewry (19th and Early 20th Centuries) in Selected Archives of the Former Soviet Union [in Russian] (1994) and is author of Beyond the Pale: The Jewish Encounter With Late Imperial Russia (Berkeley, 2002), which won the Koret Prize in Jewish History, the Vucinich Prize in Russian, Eurasian and East European Studies, the Lincoln Prize in Russian History and was a finalist for the National Jewish Book Award in History. Beyond the Pale has been translated into Russian (2007) and Hebrew (2013). Nathans' current book project, To the Success of Our Hopeless Cause: The Many Lives of the Soviet Dissident Movement, tells the story of dissent in the USSR from Stalin's death to the collapse of communism.