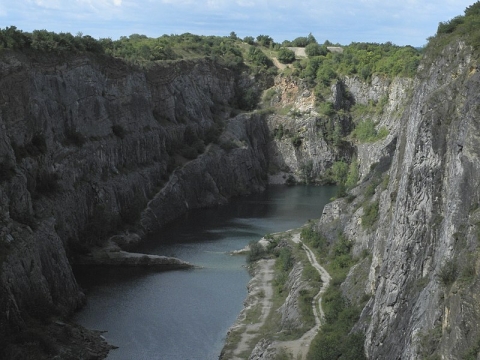 Velka Amerika quarry is located outside the village of Mořina, Czech Republic. Formerly a center for calcium mining, what was once the refuse land of industry has now blossomed into a beautiful natural scenery.
Starting in the early 20th Century, Limestone mining began at the Velka Amerika sight and in the surrounding areas. Velka Amerika, or Big America in English, was the largest of the region's quarries. Velka Amerika is connected to surrounding quarries by tunnels. These quarries were later used for both industrial and political purposes. In the late 1940s and early 1950s, the quarries were used as work camps for political prisoners of the Soviet Union. It wouldn't be until 1958 that the quarries would be tapped out, and mining would cease at Velka Amerika and the surrounding quarries. By then the quarry had resulted in a canyon 2,600 feet long and 60 feet deep.
Since the cessation of mining in and around Velka Amerika, the site has become a popular tourist attraction. Water has since been allowed to flow into the gorge, forming a pristine lake at the canyon floor. Vegetation has regrown along the sides of the canyon, providing a luscious forest scenery to complement the lake. Now known as the Czech Grand Canyon, this landmark is frequented by those in search of breathtaking views. Visitors can take an hour-long hike around the perimeter of the canyon for glimpses of the valley below from all angles.
Photo: https://commons.wikimedia.org/wiki/File:Lom_Velk%C3%A1_Amerika_-_panoramio_(21).jpg
Photographer: Jiri Bernard