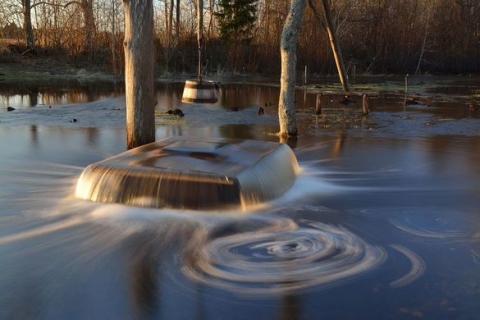 Located in the tiny village of Tuhala, the Witch’s Well is a naturally occurring geyser that has been known to flood the entire area after heavy rains. Clearly the work of witches.
The Witch’s Well is actually an example of what is known as a “karst spring.” The opening from which the spring issues is located over an underground river, which is normally located far enough underground that it isn’t a problem. But after extremely heavy rains, the river tends to swell up and issue forth from the well, completely flooding the surrounding area. The geyser effect can last for days, making for a major disaster for those effected by the flooding.
In olden times, this pandemonium was not seen as simply an unfortunate natural occurence, but was instead blamed on those perennial villains, witches. According to the local lore, witches would gather down in the well and lash each other with branches. This pagan reverie was thought to cause the catastrophic flooding that came periodically came from the well. Unfortunately it was just nature and science.
The well does not flood each time it rains, but just occasionally. It is often years between each flooding, so when it occurs, people now come from all around to check it out. A wooden cap has been placed over the natural hole, so even though it can be damaging, the Witch’s Well certainly looks like it has caged a witch inside of its depths.
Source: https://www.atlasobscura.com/places/tuhala-witchs-well