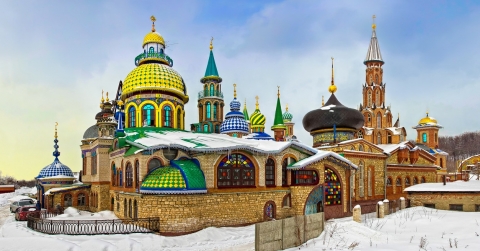 Located in the Russian city of Kazan, the colorful Temple of All Religions, or Universal Temple is a mish-mash of architectural flourishes culled from most of the major world religions to create an uber-complex where all religions can come together in harmony.
Established by philanthropist Ildar Khanov in 1992, the site is not actually a chapel in the traditional sense but is instead a center meant to stand as a symbol of religious unity. Khanov was an active proponent of rehabilitation services and, having overseen a few in his lifetime, built the center with the help of patients he met through his work. The exterior of the Temple looks almost like something out of a Disneyland Small World display, with a Greek Orthodox dome here and a Russian minaret there. There are influences culled from Jewish synagogues and Islamic mosques, and a number of spires and bells. All said the Temple incorporates architectural influences from 16 separate religions in a bright cacophony of devotion.
Khanov and his assistants lived at the site, working continually on the construction until Khanov’s death in 2013. Today the Temple is still not freely open to the public but Khanov’s associates still live on site and continue his work on the center.
Source: https://www.atlasobscura.com/places/temple-of-all-religions