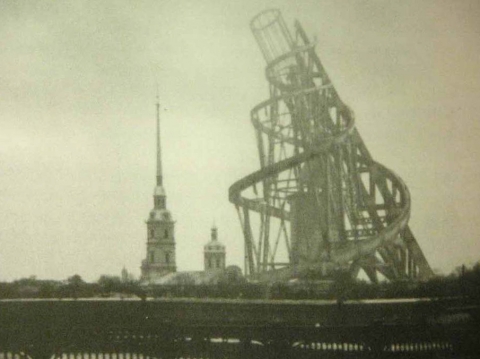 Our Logo Explained: Tatlin's Tower
Vladimir Tatlin (1883-1953) had a prominent influence on the modernist art movement flourishing in Russia between 1910-1920. This movement was linked to a general current emerging throughout Europe during that time, in which artists saw their work as essential in the new scientific age. Rather than a marginalized interest of the upper class, art became a practical activity that looked at everyday life and modernity.
Tatlin's "constructivist" approach meant that he was not afraid to explore new and unusual forms of art, using industrial materials such as glass, iron, wire, and wood, instead of the classic canvas. By 1919 he focused his energy on one project: designing a tower to the revolution, which would serve as the headquarters for the new world communist government. However, when the new Soviet Government was replaced by a dictatorship that was more conservative in its artistic and political policies, Tatlin's project was stopped and thus never actually built.
Nevertheless, there have been digital recreations of Tatlin's Tower, portraying how it would have looked in St. Petersburg. Tatlin envisioned his tower in St. Petersburg because the city connected Russia to the West and the rest of the world. The tower would have been a symbol of turning to the liberated future, a technological paradise, but it never came to be. However, the promising ideas and beliefs linked to the tower have been kept alive, especially since the collapse of communism.