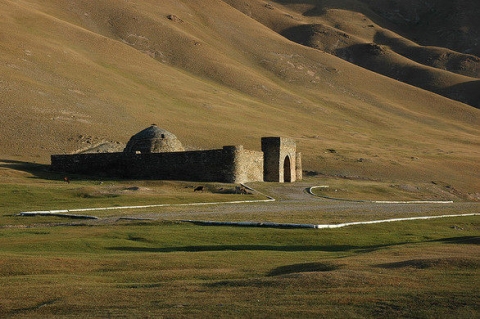 Today, we picture the caravans traveling along the Silk Road from China to the Middle East as a rather romantic image. This romanticized portrayal conceals the real dangers that the journey included, since the Silk Road crossed some of the most inhospitable regions imaginable, and many travelers died en route. Unlike its name suggests, the Silk Road was not a single route, but a connection of several established tracks, each with its own fair share of threats.

Caravanserais were an extensive network of traveler’s inns along old caravan roads, either located at cities along the way or as outposts of civilization in isolated regions, providing shelter from the hostile natural environment and from bandits.

Travelers who reached Tash Rabat have already crossed the dangerous Torugart Pass, giving them the chance to recharge their energy for the next leg of the journey through the Tian Shan Mountains, to pray for a safe passage and to restock on food and water. Some historians argue that Tash Rabat may have been a Christian or Buddhist monastery before it was turned into a caravanserai, but there is little evidence to support this theory.

Inside the caravanserai there is little to experience except wandering aimlessly through the dark corridors which are lit only by small openings in the roofs. These damp corridors and rooms, which include a well, a dungeon and a mosque, are extremely atmospheric, especially since it is not unlikely that the few visitors to the site may have the place entirely to themselves.

Silk Road caravanserais can still be found all along the former Silk Road from Central China to the Mediterranean Coast. What makes Tash Rabat stand out among the myriad of caravanserais, is its isolated location in a meditative landscape, which gives a good sense about how difficult and dangerous travel along the remote parts of the Silk Road must have been.

Even today, with modern 4WD vehicles and navigation systems, venturing out here is anything but straightforward. Snow blocks the road, which connects it with the nearest settlement, At-Bashy, for up to eight months a year. Even without snow blocking the road, constant landslides and avalanches, not to mention regular earthquakes and floodings often turn the road into a mere suggestion. Therefore, the road leading to Tash Rabat should under no circumstances be tackled without a local driver. Altitude sickness is another threat, which should not be taken lightly, since the caravanserai is located at a height of 3,500 meters. If a sudden change in road conditions make a return journey impossible, yurt camps in the vicinity of Tash Rabat can provide shelter.

To the East, the road continues to the Torugart Pass border post with China, one of the most notoriously unpredictable borders in Asia, which is reputedly more often closed than it is opened, and where crossing the border can include several days of wait.