Spotlight: Russian Monuments: The Other Kremlin 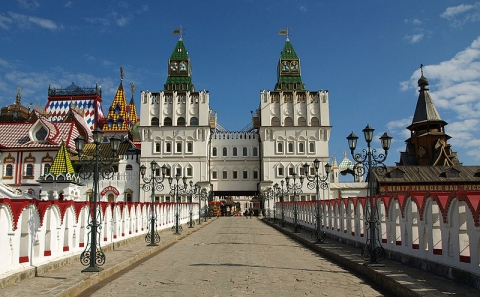 The "Kremlin in Izmailovo" is a cultural complex founded by Aleksandre Fedorovich Ushakov and Marina Viktorovna Alekseeva in 2003. It was established as a cultural center and marketplace mad in the image of traditional Russian architecture and fairytale depictions of Old Russia.

The idea of creating a center for Russian culture came to Alexander Fedorovich as a dream in which he began to see the current Kremlin with its towers, a bustling square, and a pond, surrounded by children. Day after day, the details of the new Kremlin were clearer and clearer until he finally presented his project plans to the mayor.

During the reign of Tsar Alexei Mikhailovich Romanov, the family's residence was located in Izmailovo. At the current location of the Izmailovo Kremlin, there was a farm, a linen manufactory, a glass shop, and a brick plant. It was in this area that young Peter the Great found his small boat, marking the beginning of the Russian Navy's history.

Izmailovo played a major role in developing the country's history and culture. In 1974, an exhibition of contemporary avant-guarde artists laid the foundation to the contemporary art. Not long after, the famous "Izmailovo Vernissage" was formed, an art market selling paintings, antiques, books, and Russian crafts.

According to Russian tradition, a church must be built first when establishing a new settlement. When the project of the cultural complex "Kremlin in Izmailovo" was being realized, the first thing built was a church blessed in the name of St. Nicholas of Myra, the patron saint of crafts and trade. In 2005 a fire resulted in enormous damage to the "Kremlin in Izmailovo" and the adjacent " Vernissage." Fortunately, the flames stopped before the church, leaving the sanctuary intact.

Without hesitation, Alexandre Fedorovich decided to build the "Kremlin in Izmailovo" again with the support of the Eastern District Prefecture. The Kremlin is surrounded by colorful towers, the Palace of Russian Formal Meal rises, architectural fantasy based on the works of Simon Ushakov, and a wooden palace in Kolomenskoe. The palace is decorated by its own master crafters with a griffin crown its roof, a symbol of knowledge and the emblem of the House of Romanoffs.

The mission of the "Kremlin in Izmailovo" Cultural Complex is the revival of the Russian family traditions. At the initiative of Marina Viktorovna Alekseeva, the Wedding Palace is placed in the Izmailovo Kremlin; and for children and adults, craft workshops, a high school, and a museum are open to the public. Rooms for family celebrations and hand-decorated by master artists introduce the guests to Russian folklore and immerse the visitors in an atmosphere of magic.

Perhaps the most Russian place in Moscow, the Izmailovo Kremlin is welcome to all!