The Seven Bulls of Jeti-Oguz, Kyrgyzstan 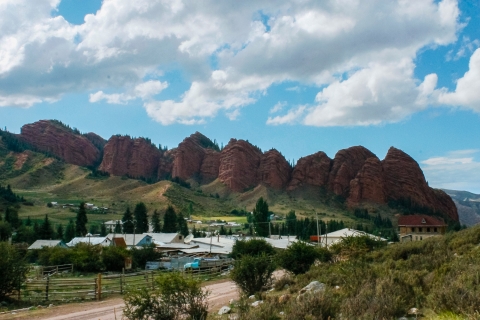 Jeti-Oguz Canyon (Seven Bulls Rocks) is one of the most famous landmarks of Kyrgyzstan, made up of several impressive natural sandstone formations. It is featured in many poems and paintings, as well as music videos. Part of the canyon resembles seven bulls, hence its name; another formation nearby is called “broken heart." According to a legend, the heart originated from a beautiful woman who died of a broken heart after two suitors killed each other fighting over her.


Located about 15 miles southwest of Karakol, the area is known for its scenic environment, surrounded by forests and waterfalls, attracting several hikers and visitors. Other than tourists, there are also several yurts and nomadic men shepherding their cattle.


Further up the valley is the Jeti Oguz Sanatorium, built in 1932. This sanatorium was the site of the first meeting between Presidents Akaev and Yeltsin in 1991, after the unsuccessful coup in Moscow.