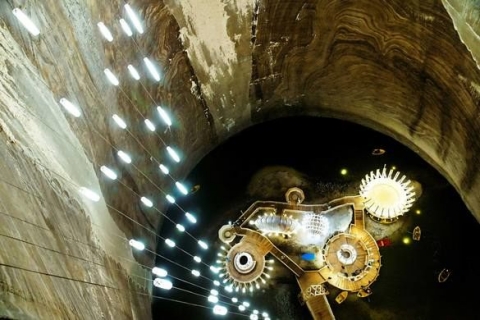 With over 2,000 years of history, highly preserved galleries, and a futuristic underground attraction, Salina Turda is the largest salt mine museum in the world, and easily the most incredible.

Located in Turda, Transylvania, the site is a large underground wonderland with a brightly lit modern art theme park nestled 120 meters below the surface of the Earth. inside one of the oldest salt mines ever known.

Salt extraction on the site’s surface started in antiquity, but the work expanded underground during the Roman occupation of Dacia. The salt was extracted manually using pickaxes, hammers, chisels, and steel wedges, by free people who were paid in florins, ale, and loaves of bread. The mine was closed in 1932, but it was used again during World War II as a bomb shelter. After the war, the mine served several purposes, one of which was a warehouse for storing cheese.

Regardless of its history, this salt mine is not just a huge museum, but an epic tourist attraction. It was even ranked by Business Insider as the most beautiful underground place in the world.

The innovative look of this gargantuan amusement park seems like something out of a science fiction movie. It contains attractions like an amphitheater, an underground lake that may be explored with paddles and rowboats, a Ferris wheel, spa treatment rooms with natural aerosols, bowling alley, mini-golf, sports field, table tennis, pool tables.

Salina Turda is one of the most stunning places anywhere on or IN the planet.
Source: https://www.atlasobscura.com/places/salina-turda