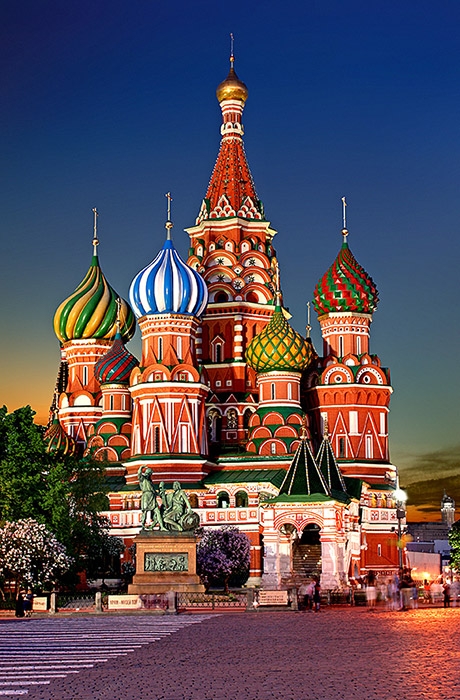 Our Logo Explained: Saint Basil's Cathedral
Saint Basil's Cathedral was built between 1555 and 1561 by Ivan the Terrible in Moscow, Russia. Legend has it that the cathedral's builder was blinded post-construction so that a structure of its beauty could never be built again. Part of its distinctive appearance can be attributed to the colorful domes and vivid redbrick towers. The domes belong to nine different chapels within the cathedral, and each dome is a symbol for the assault on the city of Kazan. The design of the cathedral draws from architectural designs found in Jerusalem, and holds strong religious meanings. When seen from the top, the eight domes surrounding the ninth dome in a circular fashion appear to form a star.
The interior of the St Basil's Cathedral greatly differs compared to its exterior, comprising of modest decorations and narrow corridors.
The cathedral has suffered damage due to fires, looting, and other incidents on several occasions throughout its history. In one legend, the French ruler Napoleon even wanted to take St. Basil’s Cathedral back to France with him. As this was not feasible, he instead ordered his army to destroy it so that no one else could occupy it. His army had prepared for attack and lit up the gunpowder, but a mysterious rain shower prevented any explosions from occurring.
Photo source: https://commons.wikimedia.org/wiki/File:1_Saint_Basils_Cathedral.jpg
Photographer: Julius Silver