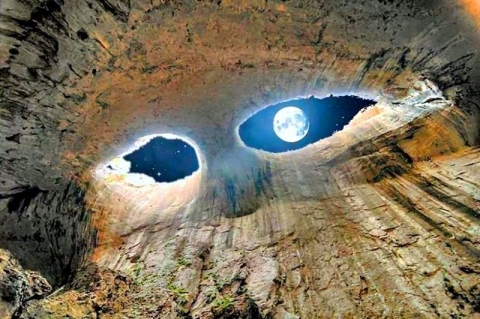 Prohodna is a cave in northern Bulgaria near Lovech, which lies northeast from the capital city of Sofia. The literal translations of the name is The Thoroughfare Cave due to the fact that there are entrances of both sides, yet they aren’t visible from either side creating the illusion that one is indeed trapped from all sides. It has become known in recent years due to two eye-like holes in its ceiling, known as The Eyes of God, which let in light into the central cavern making the cave more accessible than many others. It is 262 metres long and up to 45 metres deep, which makes it an attractive bungee jumping location and a frequent place for speleologists - scientists, who specialize in the study of caves. There are traces of prehistoric habitation in the cave, which testify that humans lived in the cave during the Neolithic period. The eye-like holes in the ceiling formed over thousands of years during the erosion from rainfall and the cave is known as one of the Top 100 Tourist Sites of Bulgaria.