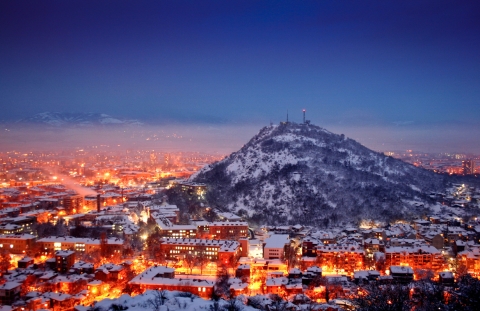 Plovdiv is Bulgaria’s second-largest city and has been recognized as one of the oldest settlements in Europe, with evidence of habitation reaching as far back as the 6th millennium BC.  Until relatively recently in its history, the city was known as Philippopolis as it was conquered by Philip II of Macedon during the 4th century BC. Originally, a Thracian settlement of the banks of Bulgaria’s largest river, The Maritsa, and on seven hills, some of which reach nearly 1000 ft in height, the city has had a turbulent history and has been invaded by Persians, Greeks, Celts, Romans, Goths, Huns, Bulgarians, Slav-Vikings, The Crusaders and The Ottomans, in the past. After the Russian-Turkish war of 1878 and the unification of Bulgaria in 1885, Plovdiv reentered the borders of Bulgaria.  Due to its complicated history, Plovdiv is the site of many remains preserved from antiquity such as a Roman odeon, aqueduct, stadium and the ancient Plovdiv Roman Theatre, dating from the 1st Century, which is also still in use today. The city has more than 200 archaeological sites, including the remains of medieval walls and towers, Ottoman baths and mosques and a well-preserved old quarter from the 19th century, many houses of which are now museums and art galleries open to the public.  In 2014, Plovdiv was selected as the Bulgaria host of the European Capital of Culture 2019.