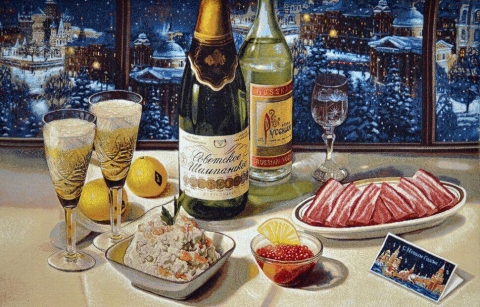 Monday, April 22, 1pm.
Max Kade Center, 3401 Walnut Street, Room 329A, Philadelphia, PA 19104
A lecture by Maria Pirogovskaya
The presentation will be accompanied by abundant typical Russian food—please come with an appetite!
The festive table of the post-war and late Soviet period demanded mountains of food and drink in an ostentatious and visually impressive display. State-issued cookbooks, women’s magazines, and film (including many beloved late Soviet screwball comedies) disseminated images of prosperity and abundance married to joyous collectivity around well-laden tables. Soviet people sought to realize these images in their own lives, despite food shortages and constraints on time. Such displays of abundance were constructed with specific forms of table setting and food design, as well as particular recipes and tastes. This spatial, visual, and gustatory organization of the table set the special occasion of the feast apart from routine meals and everyday life. Sociologists and historians have described some of the strategies and methods of making a Soviet festive table for friends and family, yet the social meanings of these practices have yet to be fully explained. In this talk, I will examine what the festive table conveyed about the cook and her guests, with particular attention to what it meant to be a ‘genuine woman and good mistress of the house’ in the late Soviet era.