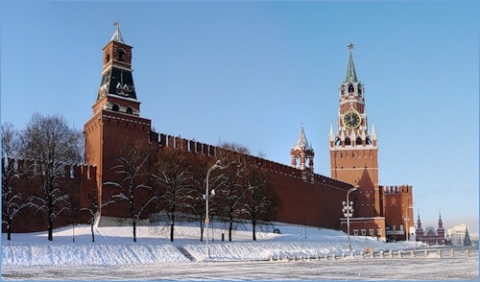 The Kremlin is a fortified complex in the center of Moscow, overlooking the Moskva River to the south, Saint Basil's Cathedral and Red Square to the east, and the Alexander Garden to the west. It is the best known of the (Russian citadels and includes five palaces, four cathedrals, and the enclosing Kremlin Wall with Kremlin towers. Also within this complex is the Grand Kremlin Palace. The complex serves as the official residence of the President of the Russian Federation. The name "Kremlin" translates to "fortress inside a city", and is often also used metonymically to refer to the government of the Russian Federation in a similar sense to how "White House" is used to refer to the Executive Office of the President of the United States.