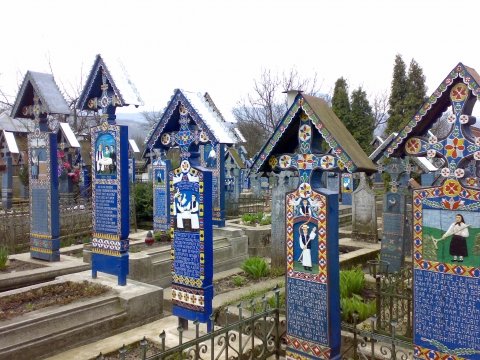 When someone dies, their memory generally enters a kind of idealized state in the minds of those who loved them. Their flaws are forgiven and forgotten, and the way in which they passed (especially if it was unpleasant) often goes unspoken. Only the sweet stories about the person are retold. On their tombstone generalized niceties are written, often reduced to as little as “Rest in Peace.”

Not so in the town of Săpânţa, Romania, where at the Cimitirul Vesel or “Merry Cemetery,” over 600 wooden crosses bear the life stories, dirty details, and final moments of the bodies they mark. Displayed in bright, cheery pictures and annotated with limericks are the stories of almost everyone who has died of the town of Săpânţa.

Illustrated crosses depict soldiers being beheaded and a townsperson being hit by a truck. The epigraphs reveal a surprising level of truth. “Underneath this heavy cross. Lies my mother in law poor… Try not to wake her up. For if she comes back home. She’ll bite my head off.”

Stan Ioan Pătraş was born in Săpânţa in 1908, and at the age of 14 he had already begun carving crosses for the local cemetery. By 1935, Pătraş had begun carving clever or ironic poems—done in a rough local dialect—about the deceased, as well as painting the crosses with the deceased’s image, often including the way in which the individual died in the image.

Stan Ioan Pătraş soon developed a careful symbolism in his work. Green represented life, yellow represented fertility, red for passion, black for death. The colors were always set against a deep blue, known as Săpânţa blue, which Pătraş believed represented hope, freedom, and the sky. Other symbolism—white doves for the soul, a black bird to represent a tragic or suspicious death—worked their way onto the crosses, as did Pătraş’s dark sense of humor.

Săpânţa is a small town with few secrets, and often the dirty details of the deceased made it onto the crosses. One reads “Ioan Toaderu loved horses. One more thing he loved very much. To sit at a table in a bar. Next to someone else’s wife.” The deceased town drunk has a grave showing a black skeleton dragging him down while he swigs from a bottle, noted in his epitaph as “real poison.”

Pătraş singlehandedly carved, wrote poems for, and painted well over 800 of these folk art masterpieces over a period of 40 years. It wasn’t until near the end of his life, in the early 1970s, that the merry cemetery, as the town has dubbed it, was discovered by the outside world when a French journalist publicized it.

Stan Ioan Pătraş died in 1977, having carved his own cross and left his house and work to his most talented apprentice, Dumitru Pop. Pop has since spent the last three decades continuing the work, carving the cemetery’s crosses, and has turned the house into the merry cemetery’s workshop-museum.

Underneath this heavy cross  / Lies my mother-in-law poor  / Had she lived three days more  / I would be here and she would read / You that are passing by / Try not to wake her up  / For if she comes back home  / She’ll bite my head off / But I will act in the way  / That she will not return  / Stay here my dear  Mother-in-law.

Despite the occasionally dark comedy, or merely dark, tones of the crosses, Pop says no one has ever complained about the work. “It’s the real life of a person. If he likes to drink, you say that; if he likes to work, you say that… There’s no hiding in a small town… The families actually want the true life of the person to be represented on the cross.” Pop has one complaint about the work, that it can get repetitive. “Their lives were the same, but they want their epitaphs to be different.”