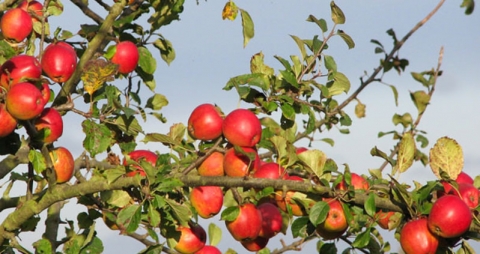 It might seem strange to think that the common apple was not originally a universal fruit, but in fact it has its roots in one specific region of the world. The ancestor of the domestic apple is the Malus sieversii, which grows wild in the Tian Shan mountains of Kazakhstan.

In the early 20th century, biologist Nikolai Vavilov first traced the apple genome back to a grove near Almaty, a small town whose wild apples are nearly indistinguishable from the Golden Deliciouses found at grocery stores today. Vavilov visited Almaty and was astounded to find apple trees growing wild, densely entangled and unevenly spaced, a phenomenon found nowhere else in the world.

Scientists believe the Tian Shan apple seeds were first transported out of Kazakhstan by birds and bears long before humans ever cultivated them. By the time humans did begin to grow and trade apples, the Malus sieversii had already taken root in Syria. The Romans discovered it there, and dispersed the fruit even further around the world. When modern genome sequencing projects affirmatively linked domestic apples to Malus sieversii, Almaty and its surrounding land were officially recognized as the origin of all apples.

Almaty means “father of apples,” and the town touts its heritage proudly. A fountain in the center of town is apple-shaped, and vendors come out each week to sell their many varieties of domesticated apples at market. Apples weren’t always a precious fruit in Almaty though. They used to be commonplace, and during Soviet development many of the trees were cut down for their wood. Up to 80 percent of the wild apple forests were destroyed.

Today, reserves throughout the Tian Shan mountain range keep the last wild apple forests growing safely—except from foraging bears, who don’t care at all about botanical history. Pomologists report that the wild apples have a variety of flavors, depending on how the bees pollinate the blossoms. There are honey- and berry-flavored apples, sour crabapples, apples that taste like licorice, and a few strains that would be good enough for a supermarket’s produce section.
Know Before You Go
The apple forests only exist in patches along the Tian Shan mountain range now. There are various protected sections in the Ile-Alatau National Park, but hiring a guide to take you there is recommended as they are difficult to find.