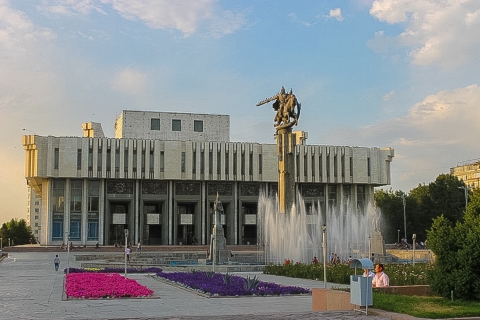 The Kyrgyz National Philharmonic is situated in the heart of Bishkek, accompanied by fountains and a large statue of Manas (an early Buddhist hero, as legend has it). The Philharmonic is named in honor of the composer and musician Toktogul Satylganov, one of the most influential figures in traditional Kyrgyz arts and literature. His career reached its peak in the Soviet era when his works were promoted by the state as a musician of the people. Even after the fall of the Soviet Union, Toktogul's songs are celebrated among Kyrgyz performers and several streets, parks, and even his hometown are named in his honor.