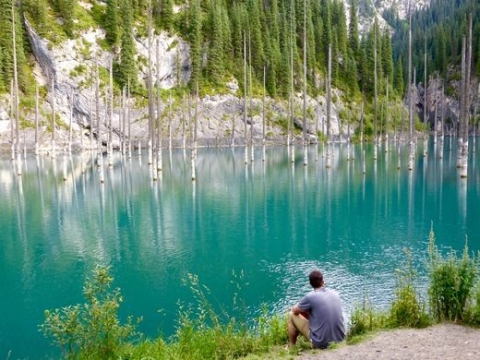 Kaindy Lake is an idyllic mountain lake in Kazakhstan’s portion of the Tian Shan Mountains, close to the country’s largest city, Almaty. The lake was formed after an earthquake in 1911, which caused a major landslide, effectively creating a natural dam. Successively, rainwater filled the valley and created the lake.

The lake is famous for the number of dead and bleached spruce trees that stick out of the water – remnants of the trees that were flooded when the lake was formed. The trees, together with the improbable turquoise water of the lake, make an incredibly scenic sight. Underwater, the imagery is even more stunning, as the trees have not decomposed and create the surreal vision of an underwater forest.

Surprisingly, the lake sees few visitors, partly because Kaindy Lake is overshadowed by the more famous Bolshoe Almatinskoe Lake and the Kolsay Lakes, all of which are close by, but far easier to reach from Almaty. Thus, despite its proximity to a city with a population of more than one million, the lake retains a peaceful atmosphere.
Know Before You Go
This lake is located in the canyon to the east of the Kolsay Lakes. Drive up to Zhalanash, the Regional Center, to the east of Almaty (turn to the right off the Narynkol highway just before reaching the Charyn River). Head from Zhalanash up to the Saty settlement in the west. This settlement is located 320km from Almaty. Turn left on the dirt road one kilometer before the village, by a cemetery. This road brings you up to the lake, but only a vehicle built for rougher terrain will make it. The lake is located in forested country.