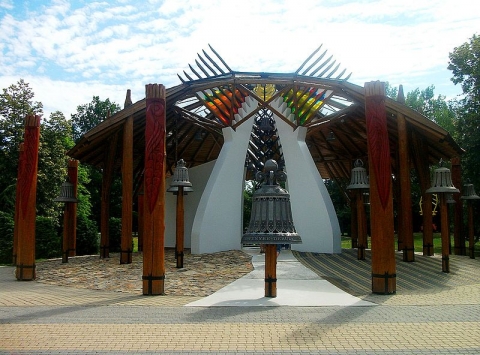 In the 1980s, a Hungarian artist Edit Oborzil and her husband Tibor Jeney filed a patent for a bell with a distinct sound that they had been perfecting for decades.

Rather than using a more common material like bronze, their bells were cast from an aluminum alloy. The bells contained long vertical slits of various patterns and shapes along their sides, which give them their harmonious sound.

The innovative bell design has been showcased at numerous international events but it was first displayed in Austria at an exhibition in 1983. Oborzil and Jeney even designed a special bell for the World Expo which was to be held in Hungary in 1996, though was later canceled.

Before her death in 1996, Oborzil donated nearly 50 bells to her hometown of Hajdúszoboszló. The bells are now showcased inside a beautiful open bell house in the town’s public park. The multicolored glass roof is supported by four pillars. The pillars have various carvings that represent the seasons and cardinal points of the compass.  Tree of Life, the legend of the White Stag, and the Spirit Bird Turul, a symbol of modern Hungary, are all depicted in this house's paintings.

The bells on display sound at the top of every hour for visitors to hear their melodic chimes.