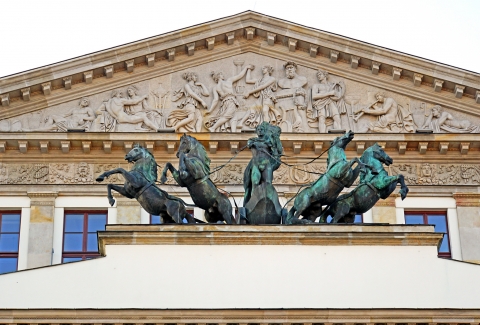 The Grand Theatre was originally inaugurated in 1833, after eight years of construction led by architect Antonio Corazzi. During World War II, the building was bombed and left in ruins as only its classical facade survived the attack. The Grand Theatre remained closed for over twenty years but was rebuilt and reopened on November 19, 1965. It continues to exist today as one of the largest theatres in Europe and across the world. It has been the host to several impressive productions and has a seating capacity that exceeds 2000.

Recently, the Grand Theatre - now also known as the Polish National Opera - set up an apiary of three beehives on the roof. Due to the various plant-filled parks and gardens around the theatre (most notably the Saxon Garden), the honey produced by the bees is very rich in flavor and quantity.