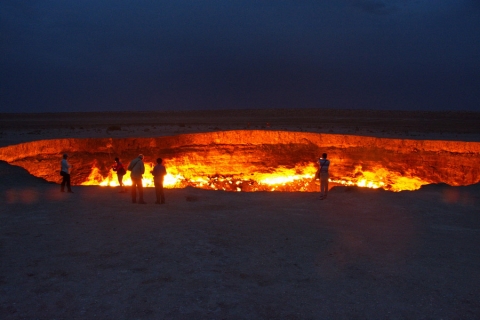 Sometimes, despite our best efforts, scientific pursuits don’t always go according to plan. And sometimes, a pit to hell may open up right beneath your feet.

Take Turkmenistan’s aptly named Door to Hell, a 230-foot-wide crater in the middle of the desert near the village of Deweze. In 1971, a team of Soviet scientists set up a drilling platform looking for natural gas reserves. The rig collapsed, and fearing the spread of poisonous methane gas, the researchers set the crater on fire hoping it would burn out in a few hours.

That was more than 40 years ago.

The site is still burning, attracting hundreds of tourists every year, even though the country’s president ordered it to be filled in 2010. Turkmenistan’s natural gas reserves rank fifth in the world, but a lack of international pipelines has hampered development efforts.