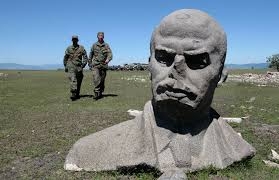 What does it mean to be a ‘post-Soviet person’ today? The Soviet Union was created and held together on the premise that the power of class consciousness could create a community that transcends the limitations of ethnicity and language. The events of 1991 shattered this illusion. As the USSR dissolved, newly created states and people across the post-Soviet space were left with the task of figuring out who they were and to what country, body politic, language, and culture they belonged. In the early post-Soviet years, this process was manifested in social violence in the form of armed conflicts in Georgia and Moldova, the expulsion of Russian nationals from Central Asian states, and criminal infighting over the privatization of former Soviet industrial complexes. As time passed, however, it began to seem that the people and states of the region were embarking on an era of peaceful co-existence, built on shared recognition of their common history and present situation in the world. The absence of visas encouraged travel within the region, while organizations like the Customs Union stimulated trade and economic cooperation. Post-Soviet political elites seemed at times to work with one another much better than they did with their European or American colleagues.

Yet armed conflicts—between Russia and Georgia in 2008, and Russia and Ukraine in 2014—have radically unsettled hopes for further peaceful development of the region. Today, the post-Soviet social space is unstable and contested. This contestation extends to people, nations, cultures, languages, architectural heritages, memories, arts, lands, industries, infrastructures, international relations, social hierarchies, and political systems. It demands a renewed critical examination of the history and reality of the post-Soviet world. What happened to people’s lives after the dissolution of the USSR? How did its sudden collapse affect the cultural sphere, language, and artistic production? How is the Soviet past remembered at the official, popular, and individual levels? What does it mean that many still name this region with reference to a political formation that no longer exists? How might this denomination still be useful, or is this a problematic naming which we need to reinterpret or reorient? Our conference will consider these and other questions.