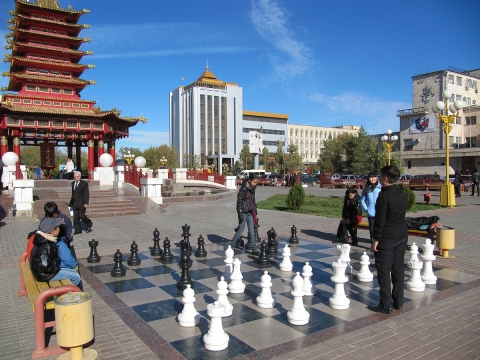 Elista is the largest Buddhist city in all of Europe and lies in the steppes of southwestern Russia. The town is home to giant monasteries and Buddhist sculptures, as well as kings and queens - but not in the traditional sense. This "royalty" can be found on the east side of Elista, in Chess City. As the name indicates, Chess City is an enclave devoted to the game of chess. It even contains a life-sized chess board open for the public to play with, as well as a swimming pool, chess museum, and a museum of Buddhist art.
The creator of Chess City was the chess fanatic and megalomaniac leader of Russia's Kalmykia province, Kirsan Ilyumzhinov. He claimed to have been abducted by aliens with the sole purpose of bringing chess to Elista, hence Chess City was built in 1998. This was just in time to host the 33rd annual Chess Olympiad, as well as hundreds of other elite grandmasters and championships in following years. The city also has a statue of Ostap Bender, a fictional literary con man and chess aficionado.
Despite the international attention that Elista received through Chess City, the complex was also highly controversial. Elista was an impoverished city and had to see to major cuts in food subsidies in order to fund the $50 million Chess City for the entertainment of foreigners. This spurred a lot of discontent in locals of the region, and after the Chess Olympiad was over, Chess City was mainly vacated and seen as symbolic of the government's misguided priorities.