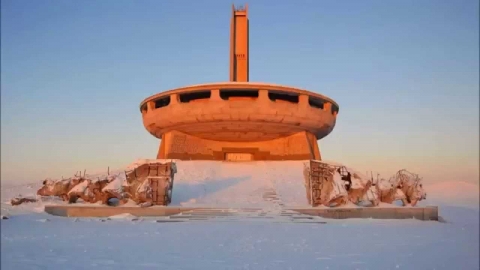 Our Logo Explained: Buzludzha Monument
On the remote Buzludzha peak in the mountains of Bulgaria stands an unusual abandoned monument. The peak itself was the site of a battle between the Bulgarians and the Turks in 1868. In 1891 a group of socialists lead by Dimitar Blagoev met on the peak to plan for Bulgaria’s socialist future.
To celebrate these events, the government in power during the height of Soviet influence decided to erect a monument commemorating socialist communism. Work on the monument began in 1974, and was undertaken by units of the Bulgarian Army assisted by numerous artisans responsible for the large statues and murals. Large images of Lenin and Marx looked over the arena built for state functions and celebrations. Above it all blazed a red star-shaped window in honor of Soviet Russia.
After the government’s fall from power in 1989, the site was abandoned and left open to vandalism. The main entrance has been sealed and therefore closed to public. However, there is still a little way to get into the building on the right hand side of the building. Inside the Buzludzha Monument, most of the artwork has been removed or destroyed, but the concrete structure still stands against the elements. No apparent plans are in place to renovate the building or surrounding area with little interest expressed by the present government in maintaining this monument to the past.
Source: https://www.atlasobscura.com/places/buzludzha-monument
More information:
https://www.lonelyplanet.com/bulgaria/veliko-tarnovo-central-mountains/t...
http://www.cnn.com/travel/article/bulgaria-buzludzha-monument/index.html