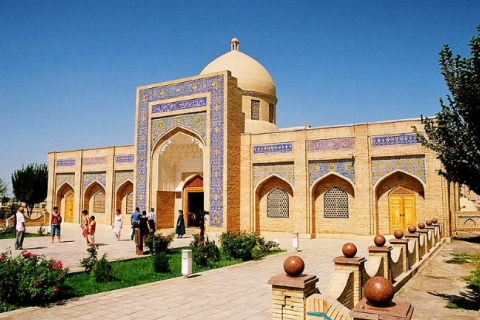 The architectural ensemble of Bahouddin, located kilometers north-east of Bukhara, in the old village Qasr-i Arifan arose from the mazar of this sufi. He had been forming for five hundred years, but it is known very little about its early history.? The first buildings near the Bahauddin mazar appeared, probably soon after the death of the sufi. Their remains, covered by later buildings were found during the architectural and archeological investigations.

Soon to the west of Mazar the cemetery appeared where murids, followers and admirers of Naqshband were buried, later here its most prestigious part (Dakhma- yi Shahan) was seceded. In the first half of 16th century by the order of Shaybanid?? Abdullaziz-khan (1540-1550) hazira (enclosure for the burial) was built around the Bahauddin mazar, and in the north-west corner there is khanaka (abode) was built in 951/1545. The structuring on the complex was carried out within the next centuries. In Soviet times, the pilgrimage was manned here. Currently, the complex is the object of an active pilgrimage. The major restoration work was carried out by orders of the President of the Republic of Uzbekistan Islam Karimov in 1993, 2003, 2010.

Eponym of the complex and the sufi brotherhood of Bahauddin Muhammad b. Burhanuddin Muhammad al-Bukhari(1318-1389) an ? Naqshbandi (better known as the Khoja-yi buzurg and Shah-iNaqshband) is the largest representative? of Central Asian? Sufism of XIV century. He is seventh sheilh in the Naqshbandiyya leader?s chain of brotherhood. Spiritual founder (and the first in Silsila line) of nakshban diyya is Khoja is Yusuf al-Hamadani (d.1140), who trained al-Gijduvani ? the founder of the Khodjagan school.

At the architectural complex of Bahauddin the historical museum that bears the name of this popular mystic was open.? It also includes the center for the Sufist study.