April 30: A Talk and Q&A with Russian Ambassador to the US, Mr. Antonov 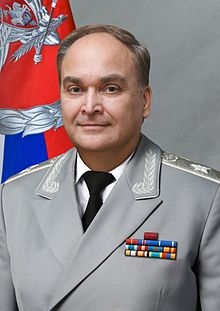 Russia’s Ambassador to the United States Anatoly Ivanovich Antonov will visit Penn to discuss Russia-US relations in a conversation with Professor Mitchell Orenstein.

Ambassador A. I. Antonov took up his post in September 2017. Prior to his current position, he served as Deputy Minister of Foreign Affairs and Deputy Minister of Defense of the Russian Federation. Ambassador Antonov is the only ambassador in the world personally sanctioned by the European Union. Ambassador Antonov remains under Canadian sanctions as well. His Excellency Anatoly Antonov has been instrumental to negotiating nuclear disarmament treaties between Russia and the United States.

Mitchell A. Orenstein is Department Chair and Professor of Russian and East European Studies and holds a secondary appointment in the Department of Political Science. Professor Orenstein has done extensive research on Russia-US relations and published several prize-winning books, with his most recent book titled “The Lands in Between: Russia vs. the West and the New Politics of Hybrid War.”

This event is a rare opportunity to engage in a vibrant discussion between a high-ranking Russian official and a leading Western scholar of Russia’s international influence. If you have a question you would like Professor Orenstein to ask the Ambassador on your behalf, please submit it here:  https://docs.google.com/forms/d/e/1FAIpQLSexqExbu0b5hsRg2pvtAk_11zvdC9EY...

Refreshments will be served.