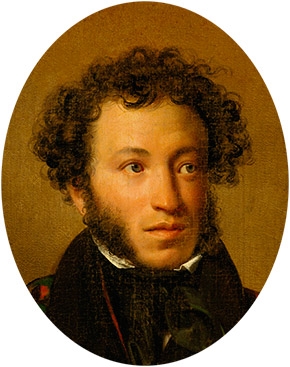 Alexander Pushkin(1799-1837) is considered by most to be Russia's greatest poet. Pushkin, the Russian national poet, is famously descended from an African slave. Pushkin's life was cut short by a duel, yet he was nevertheless astoundingly prolific, and his poems are as rich and complex as they are beautiful. In his poetry and his prose, he revolutionized Russian literature by mixing storytelling and satire with vernacular language. In 1834 Natalya Pushkina, his wife, met a handsome French royalist émigré in Russian service. Young d'Anthes had been pursuing her for two years, and eventually, his claims became so open and unabashed, that in the fall of 1836, it led to a scandal. Pushkin challenged d'Anthes to a duel. He retracted the challenge, however, when he learned from rumors that d'Anthes was "really" in love with Natalya's sister, Ekaterina Goncharova. On 10 January 1837, their marriage took place, but Pushkin refused to attend the wedding or to receive the couple in his home. After the marriage, d'Anthes resumed pursuing Natalya Pushkina with doubled tenacity. A duel between Pushkin and d'Anthes finally took place on 27 January 1837. D'Anthes fired first, and Pushkin was mortally wounded. He died two days later, on 29 January. Pushkin was buried beside his mother at dawn on 6 February 1837 at Svyatye Gory Monastery, near Mikhaylovskoye. This place, with exquisite Pushkin family estates snuggled in the picturesque landscapes, has become a Mecca for all those in love with Pushkin's works and literature in general.