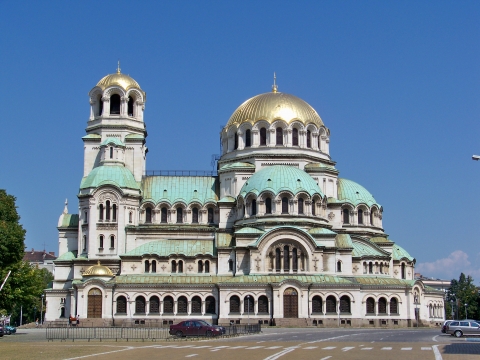 As one of the largest Eastern Orthodox cathedrals in the world, the Alexander Nevsky Cathedral, located in Bulgaria’s capital Sofia serves as one of the nation’s primary tourist attractions. The cathedral was built to honor Russian soldiers who died during the Russo-Turkish War of 1877, after which Bulgaria was liberated from Ottoman rule, and was named after Saint Alexander Nevsky, a Russian prince in the early 13th century. The foundations were laid down in 1882 but structure was not completed until 1912. The main features are the cathedral’s central dome, which is 150 ft high and the bell down, which reaches 175 ft. The design and construction are representative of the trade boom of the time as the marble parts and lighting fixtures were created in Munich, the metal elements in Berlin, while the gates and mosaics were shipped from Venice. An interesting and lesser known fact is that the name was changed during The First World War to the Sts. Cyril and Methodius Cathedral due to Bulgaria and Russia belonging to opposing alliances during the war. It’s original name was reinstated in 1920 and the cathedral was proclaimed a monument of culture on September 12, 1924. The building lies in the center square of the capital city in the vicinity of the Bulgarian Academy of Sciences, The Bulgarian Parliament and The Monument to the Unknown Soldier, a small square and monument, which commemorates soldiers who have perished in service of Bulgaria.