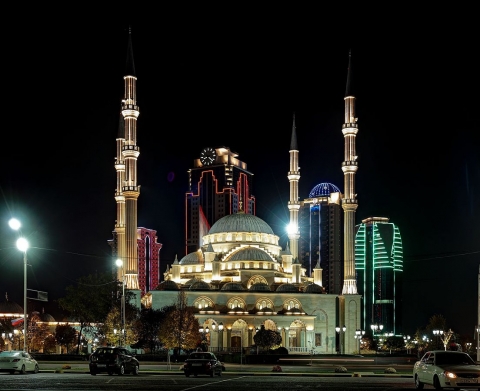 The Akhmad Kadyrov Mosque is situated in Grozyny, Republic of Chechnya. Formally known as the "Heart of Chechnya", the mosque is the largest one in Russia and one of the largest in Europe; it can host up to 10,000 people. In addition to its grandiosity, the mosque is famous for its seemingly airy lightness (the dome appears to float atop 4 supporting columns), as well as its beauty. The exterior walls are covered in travertine marble, while the interior walls are adorned with white marble brought from the Marmara Island on the Sea of Marmara. The walls and the dome are also painted by artisans from Turkey, and contain words from Surat al-Ikhlas ("The Purity of Faith", the 112th Sura of the Qur'an). Interestingly, the mosque has 36 chandeliers that are modeled after other famous mosques: al-Kubbat Sahra in Jerusalem, Rovzat-Nebevi in Medina, and the Kaaba shrine in Mecca.
Grozyny belonged to a group of fortresses lining the Caucasian defense in 1818, and was afterwards granted town status. During the late 1800's, Grozyny experienced a period of rapid growth and transformed into a regional center for the oil industry development. In 1934, the city became a center of the Chechen-Ingush Autonomous Oblast, later turning into the Chechen-Ingush Autonomous Soviet Socialist Republic (ASSR). Despite various changes in the Chechen administrative status, Grozny always remained its capital.
Photo Source: https://commons.wikimedia.org/wiki/File:Grozny._Grozny-City_Towers._Mosq...
Photographer: Alex Malev