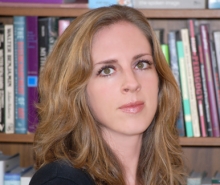 She received her Ph.D. in English from Temple University, with a specialization in film studies and critical theory.

Her teaching and research interests include film theory and history, film and nationalism, film and philosophy, and world cinema.

Her book, National and Cynicism in Post 1990s Balkan Cinema (VDM Verlag, 2008) examines the relationship between film and nationalism in contemporary Balkan cinema. She is currently working on a book about contemporary world cinema, and editing a volume on New Slovenian Cinema.