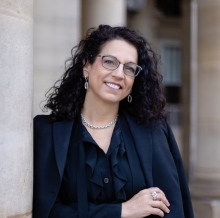 Professor and Chair of Russian and East European Studies

Member of the Graduate Group in Anthropology

When the Berlin Wall fell in 1989, Kristen R. Ghodsee was traveling in Europe, and spent the summer of 1990 witnessing first-hand the initial hope and euphoria that followed the sudden and unexpected collapse of state socialism in the former Eastern Bloc. The political and economic chaos that followed inspired Ghodsee to pursue an academic career studying this upheaval, focusing on how ordinary people’s lives – and women’s particularly – changed when state socialism gave way to capitalism. For the last two decades, she has visited the region regularly and lived for over three years in Bulgaria and the Eastern parts of reunified Germany. Now a professor of Russian and East European Studies at the University of Pennsylvania, she has won many awards for her work, and has written ten academic books on gender, socialism, and postsocialism, examining the everyday experiences of upheaval and displacement that continue to haunt the region to this day. She is also the author of From Notes to Narrative: Writing Ethnographies that Everyone Can Read and the co-author of Professor Mommy: Finding Work Family Balance in Academia. Together with Mitchell A. Orenstein, she is the author of Taking Stock of Shock: Social Consequences of the 1989 Revolutions, published with Oxford University Press in 2021.

Ghodsee’s 2018 popular book, Why Women Have Better Sex Under Socialism: And Other Arguments for Economic Independence, has already had fifteen foreign editions, including six translations into the languages of former state socialist countries in Eastern Europe (Russian, German, Polish, Albanian, Czech, and Slovak). Her book, Second World, Second Sex, also appeared in Bulgarian in 2020. Ghodeee's articles and essays have also been translated into over twenty-five languages and have appeared in publications such as Dissent, Foreign Affairs, Jacobin, The Baffler, The New Republic, NBC Think, Ms. Magazine, Jewish Currents, The Lancet, The Washington Post, and the New York Times.

In 2012, Ghodsee was awarded a John Simon Guggenheim Fellowship for her work in Anthropology and Cultural Studies. She is a former president of the Association of Members of the Institute for Advanced Study (AMIAS) and the Society for Humanistic Anthropology (SHA), and is the host of a podcast on the life and work of Alexandra Kollontai.

For security reasons, please use the linked contact form below:

Kristen Ghodsee's research interests include the lived experience of socialism and postsocialism, the gendered effects of the economic transition from communism to capitalism, and the ethnographic study of postcommunist nostalgia in Central and Eastern Europe. Ghodsee has spent over twenty years examining the impacts of the transition process on the lives of ordinary men and women.  Her early ethnographic research focused on women’s labor in the postsocialist Bulgarian tourism industry and on the effects of political transition on Bulgaria’s Muslim minorities.  Her later works are influenced by humanistic anthropology; Ghodsee has experimented with ethnographic fiction, autoethnography, and photoethnography to produce more intimate narratives and images of the disorienting impacts of the collapse of communism on daily life.

Graduate Group of the Lauder Program