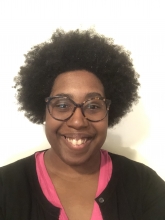 Her public writing analyzes the linkages of race, foreign policy, and culture in the United States, Russia, and Ukraine. Her writing has appeared in Foreign Policy, the Moscow Times, and the Kennan Institute's Russia File.

Race and ethnicity in Imperial Russia, the Soviet Union, and post-Soviet region

African and African Diasporic racial identity and experience in the USSR

Subjectivity in the Soviet Union

The Holodomor and peasant understandings of Soviet power in the countryside

"A Voice from the Slavic Studies Edge: On Being a Black Woman in the Field." ASEEES NEWSNET August 2020, vol. 60 no.4

Committee for the Advocacy of Diversity & Inclusion, Association for Slavic, Eastern European, and Eurasian Studies (ASEEES)

Association for the Study of Nationalities (ASN)

Board of Directors, Graduate Student Representative (2021-2023), Association for Women in Slavic Studies (AWSS)