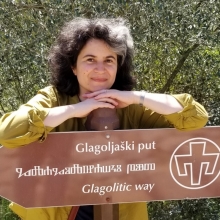 by appointment via email

I am a scholar of medieval and early modern literature, linguistic culture, religion, and intellectual history. My publications and research are concerned with the cultural space of central, southeastern and eastern Europe, particularly, Lithuania, Bohemia and Moravia, Poland, Croatia, Hungary, and Rus. In research and teaching, I deal with topics that include the history of and approaches to literature, language, writing, and literacy; literary and linguistic theory; Cyrillic, Glagolitic, Latin and Greek paleography and cryptography; and projects and theories of universal language. My undergraduate courses examine the continuity between medieval history and modern society and reveal the importance of its study in order to understand the development of contemporary culture, politics, and social norms. In literature courses, I focus on the study of reading strategies of imaginative texts that leads to the advanced understanding of literature as part of cultural history.

My early publications focus on the cultural space of the Grand Duchy of Lithuania – a multi-national and multi-cultural state of medieval and early modern Europe – and particularly its Ruthenian lands, which are now within the borders of modern-day Belarus, Lithuania, and Ukraine. My first book, Ruthenica Bohemica: Ruthenian Translations from Czech in the Grand Duchy of Lithuania and Poland (Vienna: Lit-Verlag, 2008), examines the historical circumstances and textual history of the fifteenth-century Ruthenian translations from Czech of The Song of Songs, The Vision of Tundal, The Sibylline Prophecy, and The Book of Tobit. The analysis of these Czech Catholic sources adapted in the Orthodox Ruthenian milieu shows that the cultural and doctrinal divide between the Catholic and Orthodox civilizations in the fourteenth and fifteenth centuries was not as strict as is often assumed.
Also related to the cultural history of the Grand Duchy of Lithuania are a number of articles (published in Drevniaia Rus, Slavia, etc.) and a multi-author book that I co-edited with Vyacheslav V. Ivanov, Speculum Slaviae Orientalis: Muscovy, Ruthenia and Lithuania in the Late Middle Ages (Moscow: Novoe Izdatel’stvo, 2005).
A number of my publications (published in Speculum, Viator, Ricerche slavistiche, etc.) are related to the medieval belief that the Church Father and biblical translator St. Jerome was a Slav and the inventor of the Slavic (Glagolitic) alphabet and Roman Slavonic rite. My book, The Slavic Letters of St. Jerome: The History of the Legend and its Legacy or, How the Translator of the Vulgate Became an Apostle of the Slavs (De Kalb: Northern Illinois University Press, Orthodox Christian Studies Series, 2014) explores the history of this belief and investigates its spread from Dalmatia to Bohemia and Poland. Now largely forgotten, the legend of the Slavic descent of St. Jerome was used by political and religious leaders from Rome to Bohemia and beyond for nearly five hundred years until it was debunked by eighteenth-century scholars as erroneous. I examine the origin and circulation of this belief within the wider context of European historical and theological thought and show that it had an effect far beyond the Slavic world.
I am currently working on my next book, Medieval Etymology and the Writing of History, which deals with the practice of etymologia in medieval and early modern historical narrative writing in the Latinate Europe. Contrary to a traditional view, which sees medieval etymologies as “false," ideological, constructed, or literary and figurative, I examine etymological method as a historiographic device in the context of contemporaneous theories of rhetoric and the perception of language as an epistemological instrument.