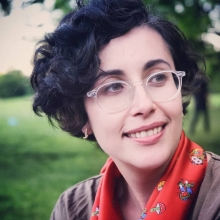 Assistant Professor of English and Cinema and Media Studies

Julia Alekseyeva is an Assistant Professor of English and Cinema and Media Studies at the University of Pennsylvania. She received her Ph.D. in 2017 from Harvard University’s Department of Comparative Literature, with a secondary field in Film and Visual Studies, and has taught at Harvard and Brooklyn College. Prior to her appointment at Penn, she was a postdoctoral fellow in the Reischauer Institute of Japanese Studies.

Prof. Alekseyeva is currently working on an academic monograph which explores the avant-garde documentary tradition in the 1960s. Specifically, this work argues that the critique of both capitalism and socialist realism resulted in highly experimental forms of politically engaged documentary filmmaking in the postwar era. She has previously written on topics such as Soviet avant-garde film, the semi-documentary in East Asia, Pink Film, transnational animation, and the French New Wave.

Along with her academic research and teaching, Prof. Alekseyeva is also an author-illustrator, whose award-winning non-fiction graphic novel, Soviet Daughter: A Graphic Revolution, was published in 2017. She has published several articles on global film and media history, in both written and graphic narrative format, in The Journal of Japanese and Korean Cinema, The Nib, Cine-Files, Jewish Currents, and The Paper Brigade. She is currently working on an anthology of her published academic essays in graphic narrative format.

Dr. Alekseyeva researches the interactions between global media and radical leftist politics. Her work is fundamentally comparative and transnational, and delves into the film, comics, television, and digital media of Japan, France, and the former Soviet Union.