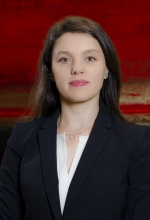 Senior Lecturer of International Studies at the Lauder Institute

At the Lauder Institute, Dr. Locoman is responsible for curricular development and academic oversight of its Global Knowledge Lab (GKL), the capstone vehicle through which joint-degree students carry out independent original research and complete their M.A. thesis. In addition, Dr. Locoman is a member of the teaching faculty within the Lauder Institute’s Global Program with a focus on international order-making, the study of international relations, and comparative politics.

Prior to Lauder, Dr. Locoman was a Lecturer in the M.A. Program in United Nations and Global Policy Studies at Rutgers University. She also served as the Program Director of the Undergraduate Exchange Program between Rutgers University and Ritsumeikan University in Kyoto, Japan.

Dr. Locoman’s research focuses on comparative foreign policy analysis, the politics of alliance formation, mass media and public opinion, diplomacy, and the geopolitics of national interest, with a regional emphasis on Central and Eastern Europe and the former Soviet Union. Her book project, “Looking East or Looking West: Explaining Variations in the International Alignments of Post-Communist States”, explores why post-Communist states in Europe followed divergent foreign policy paths after the dissolution of the USSR. In addition, she had extensive experience and training in comparative analysis and field research, having completed studies at the Institute for Qualitative and Multi-Method Research, as well as prior training as a journalist. She previously worked for Radio Free Europe/Radio Liberty, covering a wide array of issues, including migration, human trafficking, taxation, and foreign policy.