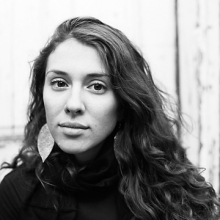 Her research focuses on the lyric rendering of trauma, particularly that of the Holocaust, in contemporary American poetry, much of which is composed by emigrants of the former Soviet Union. She is also interested in this poetry's relationship to the work of Russian poets of witness such as Akhmatova and Mandelstam.

Julia's poetry has appeared in Missouri Review, Gulf Coast, TriQuarterly, and Guernica. She has received fellowships from the Bread Loaf and TENT Writers’ Conferences as well as the Auschwitz Jewish Center. Julia is the author of The Bear Who Ate the Stars, winner of Split Lip Magazine's 2014 Uppercut Chapbook Award. She is also the Editor-in-Chief of Construction Magazine.