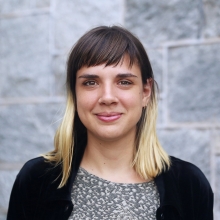 Helen Stuhr-Rommereim is a Ph.D. Candidate in the Comparative Literature & Literary Theory Program at the University of Pennsylvania.

Helen's dissertation, Let Some Genius Write a Poem: The Radical Tendency in Reform-Era Russian Literature, examines how questions of aesthetic and political representation converge in prose works by the cohort of non-noble writers who came to prominence in Russia following Chernyshevsky and Dobroliubov in the 1860s: the raznochintsy realists. She argues that these authors challenged the limits of existing literary forms in ways that responded to and critiqued contemporary progressive political ideologies.

Her other academic interests include the history of Russian literary theory, the representation of peasants in literature, feminist and sexuality theory, Formalism, the Literature of Fact, and early Soviet aesthetics and literary criticism. She has peer-reviewed articles published in Feminist German Studies (co-written with Mari Jarris), and forthcoming in The Russian Review.