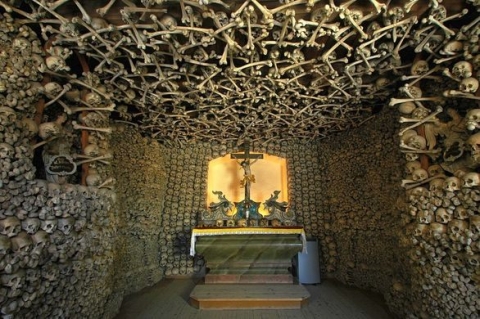 In 1776, while America was declaring its independence from England, and bodies were piling up in the American revolutionary war, a priest and grave digger in the small Polish town of Czermna, (a kilometer to the north of Kudowa Zdroj) were also busy piling up bodies, but for a very different purpose.

Within the modest looking St. Batholomew’s Church (also called the Kaplica Czaszek) are the skulls and bones of over 3,000 people, decorating the ceiling and walls, and arranged in various patterns — mostly in a repeating crossed bones Jolly Roger-style — with another 21,000 skeletons stuffed in the church crypt below. Collected by Czech priest Vaclav Tomasek and J. Langer, the local grave digger, it took the pair some 18 years, from 1776 to 1794, to collect, clean and arrange the as many as 24,000 human skeletons that pack the church. While the majority of the skeletons are stacked in a 16-foot deep crypt beneath the church, the rest are beautifully displayed in what Tomasek saw as a “sanctuary of silence.”

The two had plenty to choose from in terms of raw materials. The Thirty Years War, the Seven Years War, and numerous other skirmishes between Catholic, Hussite and Protestants, Poles, Czech and Germans that bordered the area, left mass graves aplenty, not to mention the cholera epidemics that routinely killed hundreds. Tomasek apparently found the mass graves by watching where local dogs went to dig for bones.

As the two uncovered and cleaned the thousands of skeletons, the priest and grave digger set aside skulls of interest for display in the church. Today the skulls are still displayed, and include a Tartar warrior’s skull, the Czermna mayor and his wife, skulls with bullet holes, a skull Swiss-cheesed by syphilis, and even the skull of a giant. Besides these special skulls are those of the priest and the grave digger themselves, presiding proudly over the Chapel of Skulls they created and now call their final resting place.

A trapdoor to the crypt below can be opened to reveal the other 21,000 skeletons stacked just below. There is a recording in the church that explains the history of the chapel, but so far it is only available in Polish, Czech, and German.